Although it’s not an essential nutrient, caffeine is a stimulant that occurs naturally in nature, as a member of the methylxanthine class of compounds. Considered the most widely used psychoactive drug in the world, we know that caffeine is found in coffee, tea, soda, energy drinks, protein powders, chocolate products, and more. But what about caffeine contained in over-the-counter drugs, diet pills and supplements, and prescription medications? 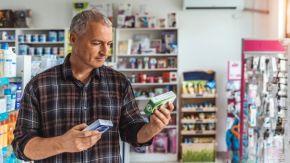 Certain medications and supplements contain caffeine, and when combined with other caffeine you are consuming, can prove harmful to your health.

It’s important to exercise caution when combining caffeine from drinks and foods with medications or supplements that also contain caffeine. Too much of this stimulant can be harmful to your health—and sometimes even lethal.

How much caffeine is too much? According to the FDA, sticking to 400 milligrams of caffeine a day—about four or five cups of coffee—will keep the majority of healthy individuals out of the danger zone. (Of course, “too much” varies from person to person, so if you experience jitters, rapid heart beat, upset stomach, anxiousness, or heachaches, you may want to cut back.)

For comparison’s sake, the average 8-ounce cup of coffee contains 95 mg of caffeine. Toxic effects are experienced after the ingestion of 1,200 mg of caffeine (12 cups of coffee is the equivalent of 0.15 tablespoons of pure caffeine), and include tachycardia, ventricular arrhythmia, and seizures. Caffeine can be deadly in quantities exceeding between 10,000 and 14,000 mg (1.2 to 1.7 tablespoons of pure caffeine).

The following is a list of prescription and over-the-counter (OTC) drugs that contain caffeine. When taking these, you should monitor your daily caffeine intake to avoid caffeine overload.

This product comprises two analgesics (aspirin, acetaminophen) and an enhancer (caffeine) to treat headaches. Although caffeine can be a headache trigger, according to the makers of Excedrin, the caffeine found in Excedrin actually helps relieve headaches.

“Caffeine is referred to as an ‘analgesic adjuvant’. This means that it helps to boost the effects of certain pain relievers. In the case of Excedrin, caffeine boosts the pain-relieving effects of aspirin and acetaminophen—making these medicines up to 40% more effective,” the makers noted in a usage statement. “That’s why you’ll find caffeine in almost all Excedrin products. Only Excedrin PM Headache does not contain caffeine, as caffeine consumed too close to bedtime can keep you from getting a good night’s sleep.”

Caffeine per caplet: 60 mg
Maximum dosage: 2 caplets every 6 hours (no more than 6 caplets per day)

The Midol brand of products is specifically formulated to help with the pain and discomfort of premenstrual syndrome, though it can be taken by men for the symptoms of headache or body aches.

According to its makers, “Fatigue is a common complaint among women during their periods, so Midol Complete is specially formulated with 60 mg of caffeine per caplet. ”

They continued, “The caffeine in Midol Complete also acts as a diuretic that helps reduce bloating. When taking Midol Complete, it’s important to avoid any extra caffeine from other sources such as coffee or soda. Instead, drink more pure water to keep your body well hydrated. Midol Complete is the only Midol product that contains caffeine.”

Vivarin is marketed as an alertness aid, and should be used only occasionally. Especially with Vivarin, consumers should limit use of other food or beverages containing caffeine. Vivarin contains 200 mg of caffeine per tablet—the equivalent of a nearly 2-ounce energy shot. Children under 12 years should not take the drug, and pregnant and breast-feeding women should express special caution.

Some iterations of Hydroxycut weight loss products—a favorite among athletes and dieters everywhere—contain no caffeine, while others do. A dose of Hydroxycut Max Advanced for Women, for instance, packs around 400 mg of caffeine. When taken in excess or combined with other caffeine sources, Hydroxycut could contribute to caffeine overdose .

Of particular concern, the excess caffeine found in Hydroxycut and other OTC supplements could lead to exertional rhabdomyolosis. According to the authors of an article published in Military Medicine: “Exertional rhabdomyolysis is an enigmatic syndrome with multiple risk factors and a wide spectrum of clinical outcomes. Dietary supplements containing caffeine may potentiate the rhabdomyolysis cascade, and present an area of attainable prevention.”

Exertional rhabdomyolosis can result in a host of complications, including mitochondrial dysfunction, increased intracellular calcium, protease activation, production of reactive oxygen species, and death of myocytes.

This drug is taken for musculoskeletal pain. In addition to caffeine, each tablet of Norgesic Forte contains 770 mg of aspirin and 50 mg of orphenadrine citrate. Orphenadrine citrate is a white, odorless, crystalline powder that tastes bitter. According to preclinical studies, orphenadrine citrate acts centrally on the brain stem, by blocking facilitatory functions of the reticular formation, which is responsible for sleep and consciousness.

The exact mechanism of orphenadrine citrate remains to be elucidated but this analgesic does harbor anticholinergic properties. According to the NIH, “Because of the mild anti-cholinergic effect of orphenadrine, Norgesic Forte Tablets should not be used in patients with glaucoma, pyloric or duodenal obstruction, achalasia, prostatic hypertrophy, or obstructions at the bladder neck. Norgesic Forte Tablets are also contraindicated in patients with myasthenia gravis and in patients known to be sensitive to aspirin or caffeine.”

Caffeine per capsule: 40 mg
Maximum dosage: 1 or 2 capsules every 4 hours (no more than 6 capsules per day)

In addition to caffeine, Fiorinal contains 325 mg of aspirin and 50 mg of butalbital, a short- to intermediate-acting barbiturate, thus this drug is classified as Schedule III by the Drug Enforcement Agency (DEA). The barbiturate component of this drug provides anxiolytic relief and muscle relaxation. Fiorinal is prescribed for complex or tension headaches.

According to the NIH, “The clinical effectiveness of Fiorinal in tension headache has been established in double-blind, placebo-controlled, multi-clinic trials. A factorial design study compared Fiorinal with each of its major components. This study demonstrated that each component contributes to the efficacy of Fiorinal in the treatment of the target symptoms of tension headache (headache pain, psychic tension, and muscle contraction in the head, neck, and shoulder region). For each symptom and the symptom complex as a whole, Fiorinal was shown to have significantly superior clinical effects to either component alone.”

Prescribers should express caution when prescribing this drug to the elderly and those with debilitation, coagulopathy, impaired hepatic/renal function, hypothyroidism, urethral stricture, Addison disease, and prostatic hypertrophy.

To be on the safe side, always read labels on OTC drugs, supplements and diet aids, to check if they contain caffeine, and monitor your caffeine intake when using these products. Also be aware that caffeine may interact or interfere with other medications you are taking.

About "Avoid caffeine overload when taking these drugs"

Reviewed By This Is Article About Avoid caffeine overload when taking these drugs was posted on Tuesday, November 17th, 2020 have 4 stars rating.

Good News For Coffee Lovers: Kahlúa® Is Transforming The Coffee Cocktail Game, Again, With The Launch Of Its Newest Expression