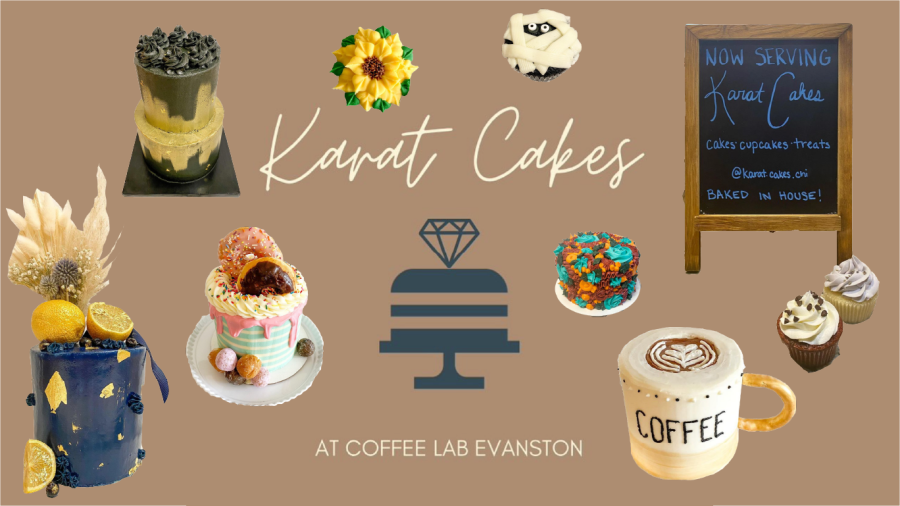 In a “spur of the moment decision” one day during the pandemic, Kara Suckling (Bienen ’20) baked a cake.

One year later, Suckling became the owner of a small business, Karat Cakes, which bakes goods for Coffee Lab. Suckling, who studied music performance as a Bienen graduate student, is aiming to join an orchestra or military ensemble. In addition to practicing french horn and teaching private music lessons, she works full-time at Coffee Lab, splitting her hours on the floor as a barista and baker.

She officially began her business Karat Cakes in October 2020 with the creation of an Instagram page. After baking in her apartment for nearly a year, she began baking goods and working at Coffee Lab in September.

Suckling said her favorite part of the job is seeing how excited the customers get about her creations.

“There is this one really sweet lady that comes in every time I bake just to get the brownies,” Suckling said. “A couple times I didn’t make brownies. She was like, ‘Where are the brownies?’ So now I specifically make brownies every time because I know she’s going to come in for them.”

While she primarily bakes cakes and enjoys making classic cake flavors, Suckling said she also likes to experiment with flavors such as a cinnamon streusel cake, one of her personal favorite creations. For Coffee Lab, she also bakes pumpkin chocolate chip bread and muffins.

Suckling said she markets her products by bringing free baked goods to various events, such as church and work.

“I would make something for free and just give it out to people I knew, and they would like it and then start ordering,” Suckling said.

Allen Bower, manager of training and development at Coffee Lab, said Suckling is a hard worker and fast learner.

He said he personally enjoys her baked goods and recently bought more than two dozen cupcakes with various designs for Halloween.

“Her products taste good and look amazing,” Bower said. “I think people should really look into it if they have baked good needs.”

Suckling said she typically takes around five to six orders per month and tries out new flavors when customers specifically request them, like the cinnamon streusel cake.

Coworker and barista Holly Wagner said she and Suckling have been friends since college, and she enjoys working alongside her at Coffee Lab.

“I love hearing the machine fire up in the back,” Wagner said. “It’s comforting because I know that there’s going to be really good food coming up, and it always smells amazing.”

Wagner said she frequently eats Suckling’s creations, and her favorite is the s’mores cupcake.

Suckling said her musical background has taught her essential skills that have helped her persevere with baking as well as creating and maintaining her small business.

“As a musician, we’re used to having to spend time practicing, paying attention to details, just learning to improve our craft,” Suckling said. “That general principle that I’ve learned through years of music performance in college just really pays off.”

Reviewed By This Is Article About Bienen alumna Kara Suckling bakes custom cakes at “Karat Cakes” was posted on Thursday, November 4th, 2021 have 5 stars rating.

“We do coffee, but the clothes really hit.” This is No Free Coffee’s Instagram b…

The six best places to get your coffee fix in Ottawa

Coffee doesn’t need a sales pitch, and neither do most coffee shops. That said, …

New Zealanders line up for fast food out of lockdown [Video]