Britain took further baby steps towards normality today as more businesses tentatively reopened stores which have been shuttered by the coronavirus lockdown.

Queues of customers began lining up outside Homebase outlets this morning as the DIY chain reopened all of its 164 nationwide branches.

Coffee-lovers flocked to Costa to get their caffeine fix as the drinks giant started serving at more of its drive-thrus following a trial at two sites last week.

Warm weekend weather pulled people outside to the nation’s parks and beaches following a miserable week of downpours.

This was reflected in the traffic data for the country, with the big cities showing a one per cent increase in the number of cars on the road compared to last Saturday, according to Tom Tom.

Essential businesses which form the backbone of UK society have been allowed to operate throughout the lockdown, but many decided to shut shop to protect their staff and customers.

Yet as infection rates begin to drop and the economy flags, some are cautiously reopening with the blessing of ministers, but with strict social distancing measures. 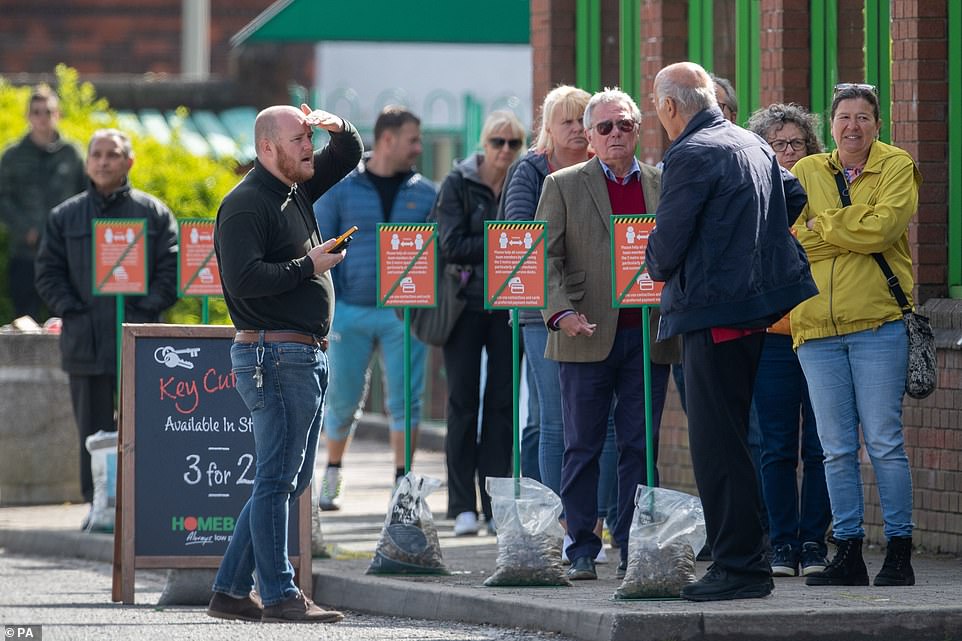 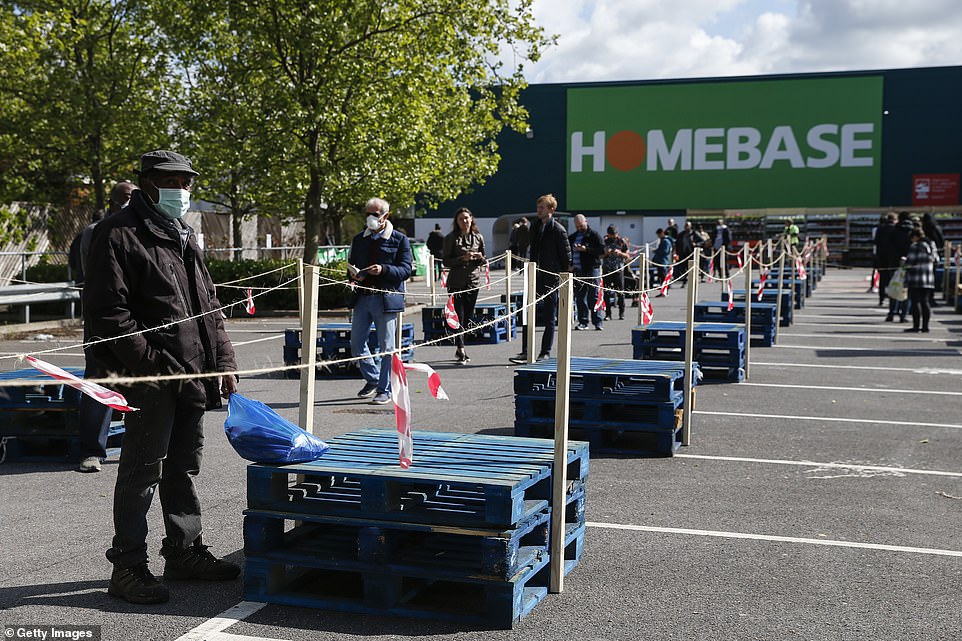 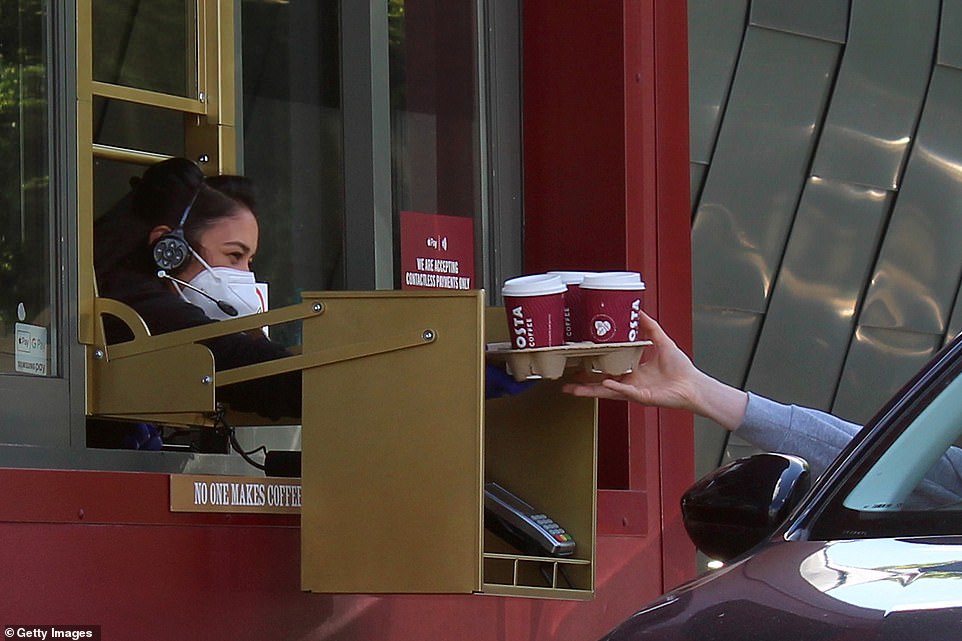 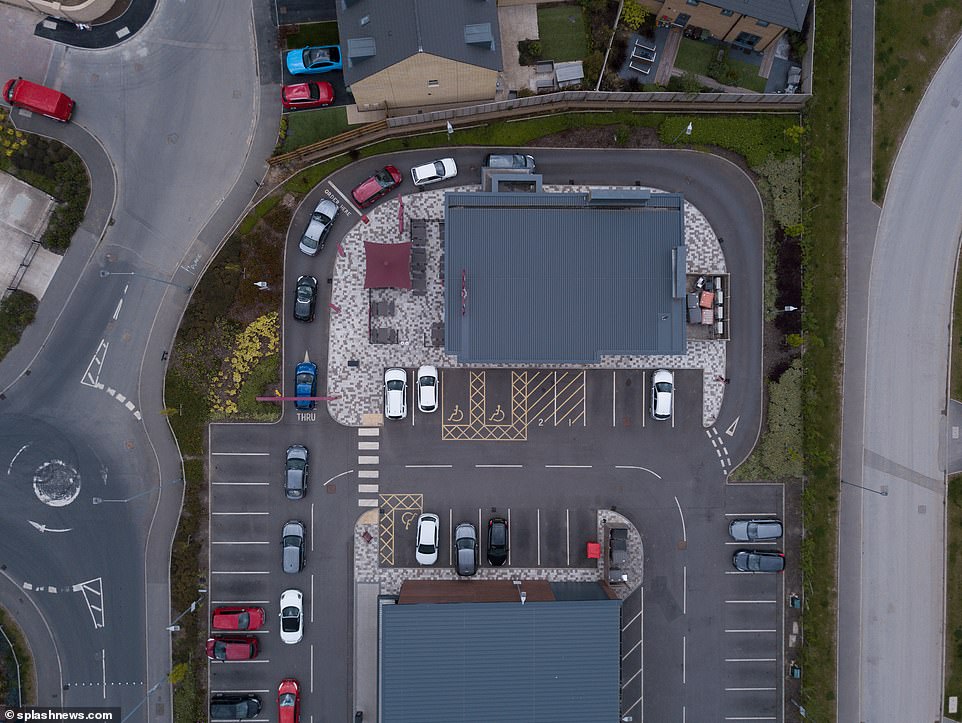 Queues of cars snake round the road as they wait in line for coffee at Snow Hill Retain Park in Wakefield, Yorkshire today 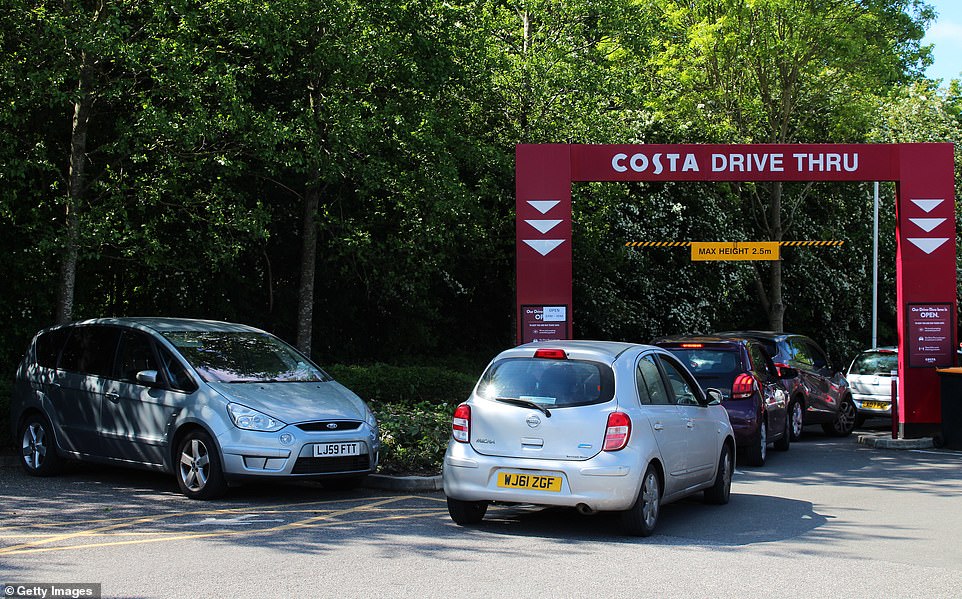 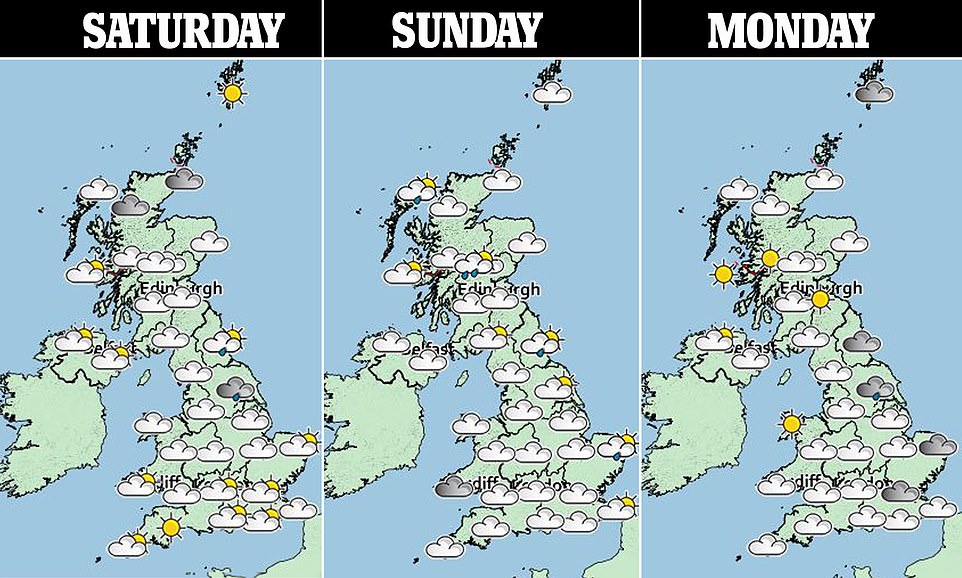 Costa opened two of its stores last week to trial social distancing measure which the company hailed a success.

Yesterday it tweeted: ‘Since opening 2 Drive-Thru & 2 delivery stores last Friday we’ve had a fantastic response from our team members & customers.

‘As such, & with the support of the Government, we will be increasing the number of Drive-Thru lanes & stores open for delivery via Uber Eats from tomorrow.’

Edinburgh, Croydon, Leicester and St Ives in Cambridgeshire were among the 29 stores which started serving this morning.

While Costa is implementing a phased return of its branches, Homebase by contrast reopened all of its stores across the UK.

The company said: ‘Following a successful trial, our stores across the UK have now reopened, with strict controls in place to ensure shopping is safe.’

Markers enforce the two-metre rule for queuing outside the store and inside customers are told to maintain social distancing.

DIY stores are proving the most popular in the lockdown as people use the time indoors to complete jobs around the house.

This week in lockdown, Britain has seen a stark contrast in weather from the rest of the month which was the sunniest April on record for the UK with an average of 224.5 hours of sunshine. 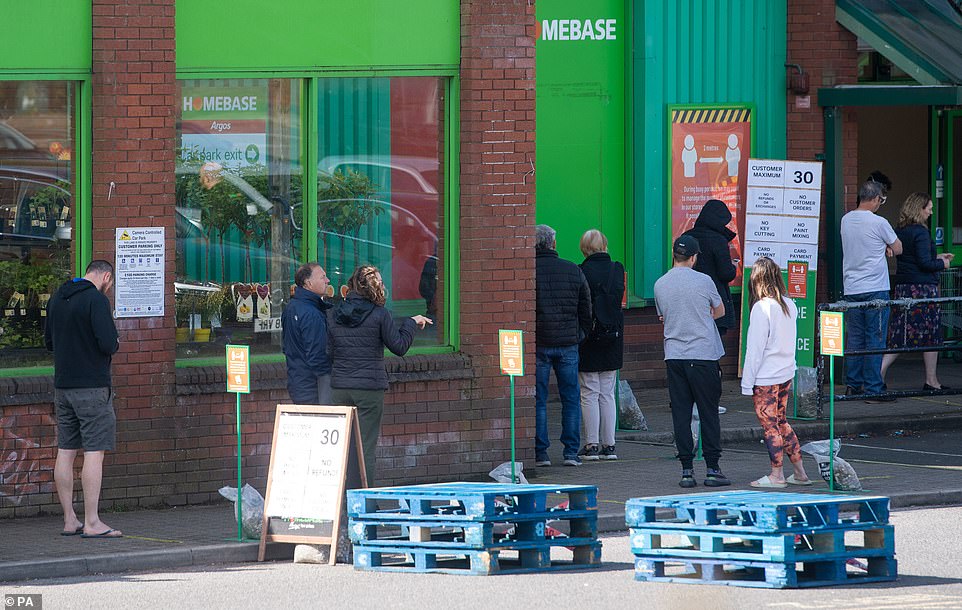 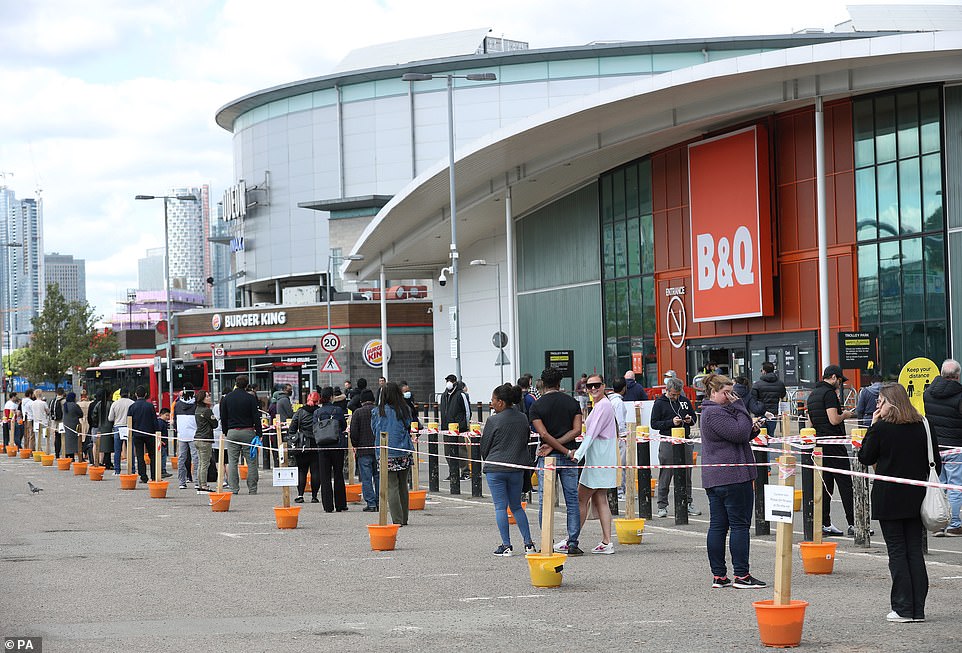 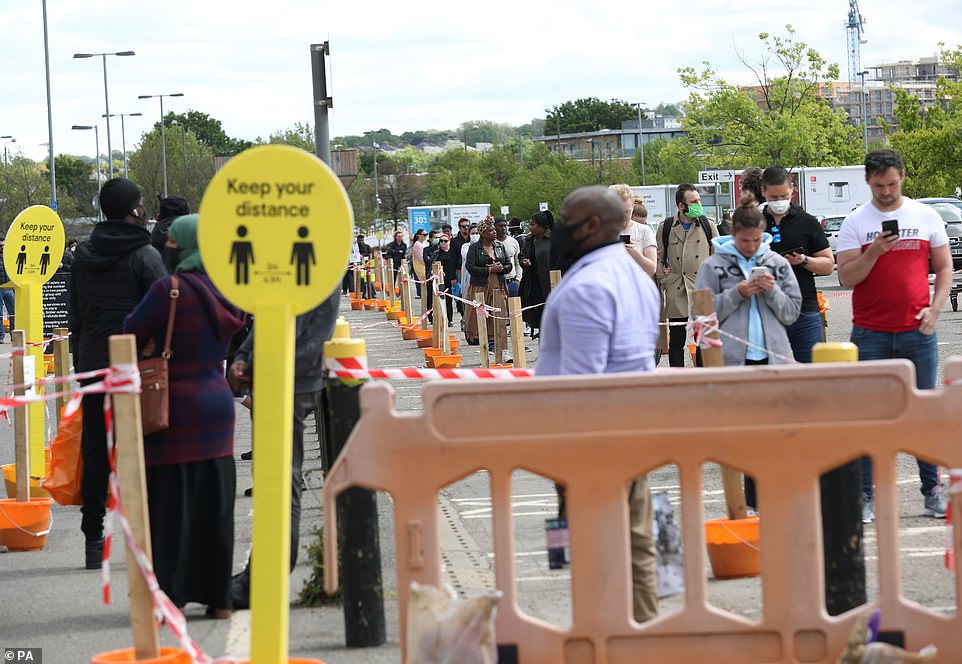 There were ‘keep your distance’ signs next to the long queue, encouraging people to follow social distancing queues even while waiting to enter B&Q 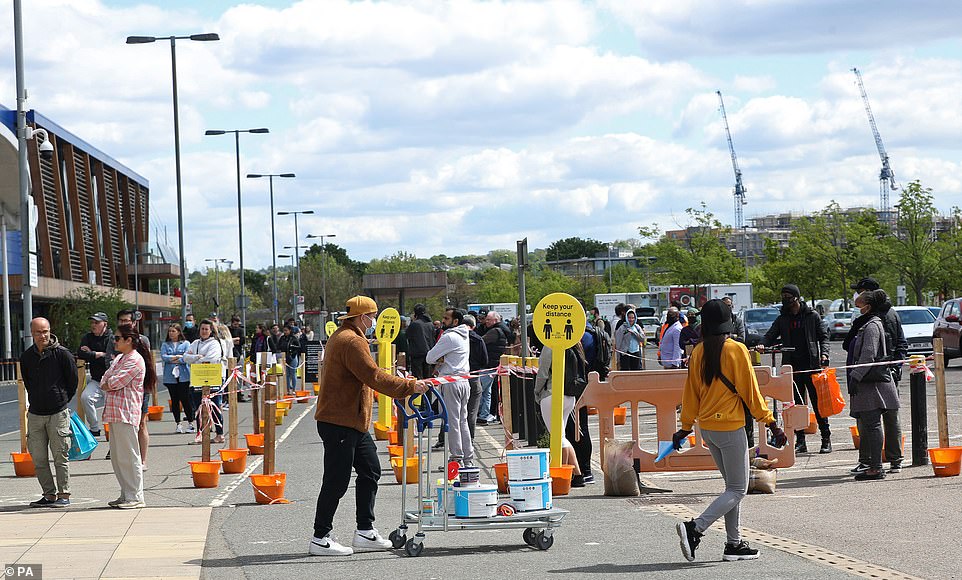 The low weather pressure which has been sitting over the UK and causing the unpleasant weather across most of the country this week will move across to Europe over the weekend and the bright spring weather will return.

While some took the wet weather, which saw a week’s worth of rain fall in 12 hours, as a good reason to stay indoors, many will be pleased to be able to get out into the garden and enjoy the sunshine while outside for their daily exercise.

The Met Office says the low pressure will be replaced by building high pressure resulting in ‘dry, fine and settled weather’ over the weekend and into next week.

The latest forecasts predict the spring heatwave will make a comeback for May with mercury predicted to soar to as high as 65F in the southeast and the rest of the country reaching a comfortable 59F. 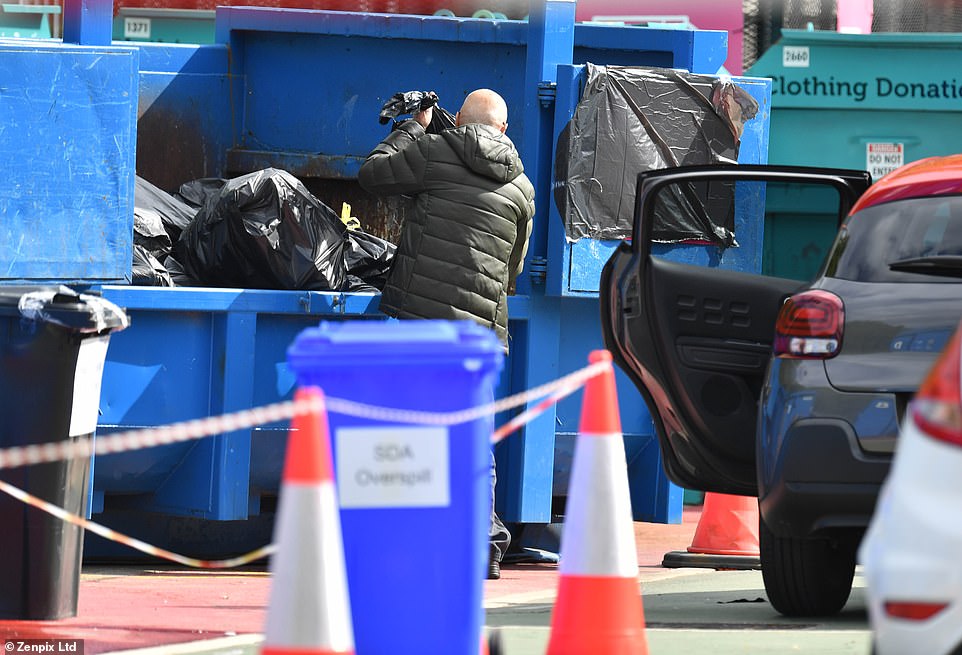 People also headed out to dump their rubbish at reopened tips across the country today. Pictured: A man dumps a number of black bags in a tip today 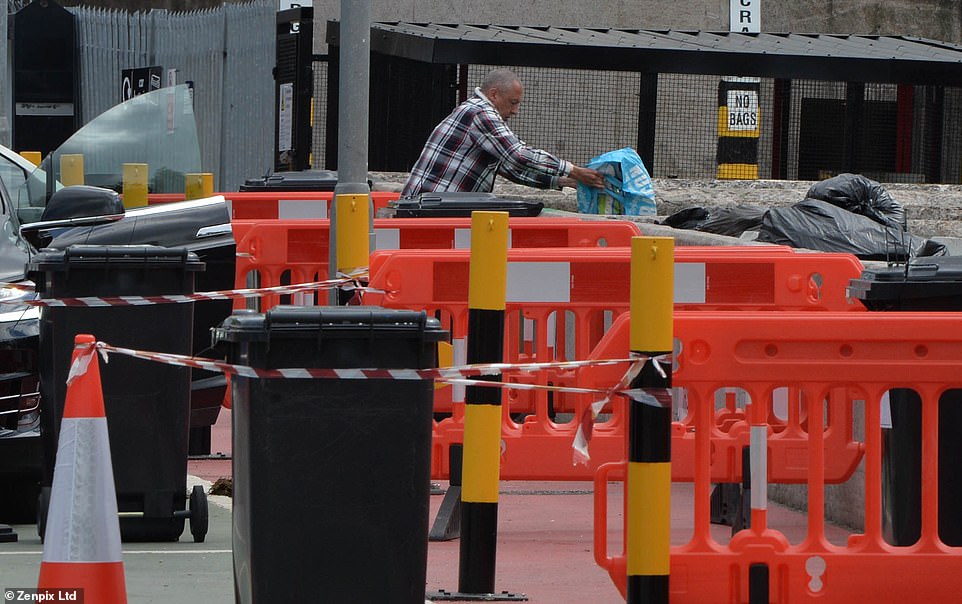 Pictured: A man dumpinf a number of black bags in a tip today at Reliance Street tip in Manchester 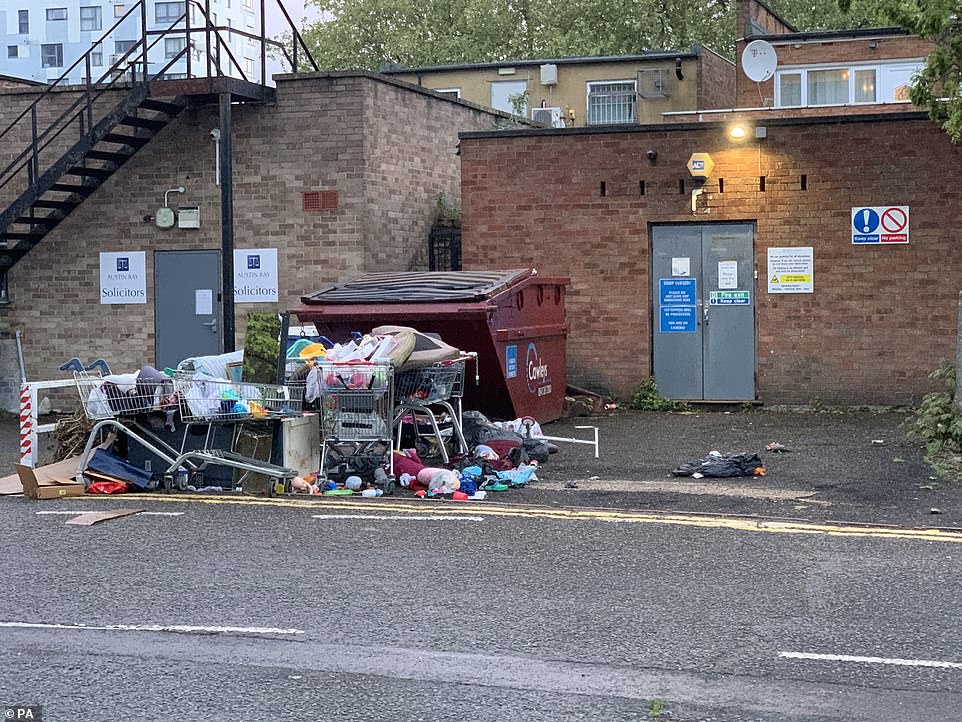 Undated handout photo issued by the Twitter feed of @thesammercer showing fly tipping in Findlay Way, Bletchley, London yesterday as the UK continues in lockdown to try to stop the spread of the coronavirus

As the UK heads into the sixth weekend of coronavirus lockdown it welcomes the return of the warm spring sunshine with some parts of the east coast feeling more of a chill in the air and Newcastle and Edinburgh experiencing lows of 53F.

Brits are warned to expect some showers on Saturday, with the heaviest and most frequent in the northeast, but the south should generally remain dry and sunny.

Ministers will be hoping the resurgence of sunshine will not encourage Brits to venture outside of their homes and break lockdown rules as has been seen in the past few weeks.

The Met Office warned people to wear sunscreen as UV levels hit moderate to high in the sunshine on Saturday. 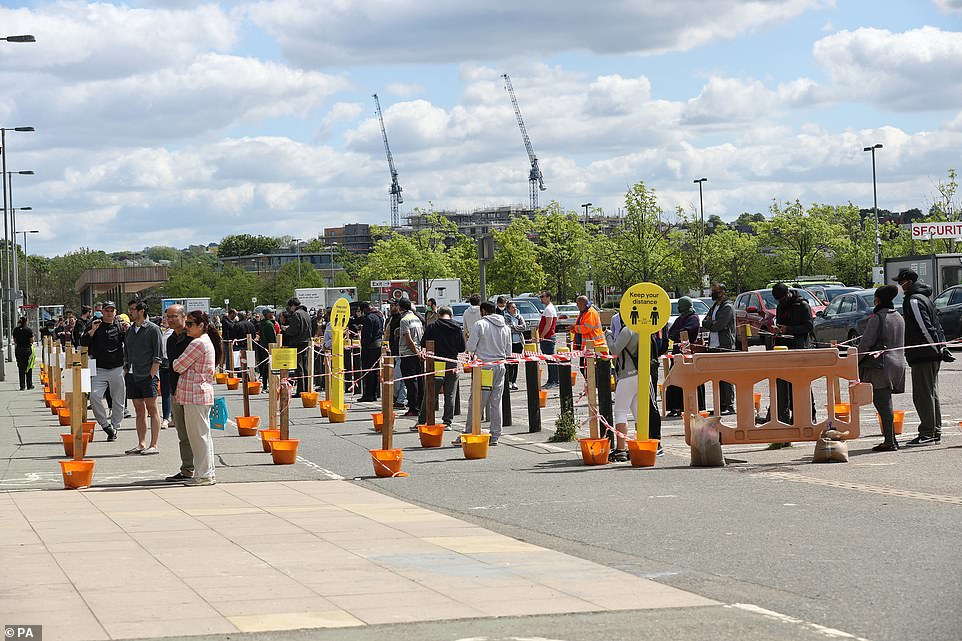 DIY stores are proving the most popular in the lockdown as people use the time indoors to complete jobs around the house. Pictured is B&Q in Greenwich 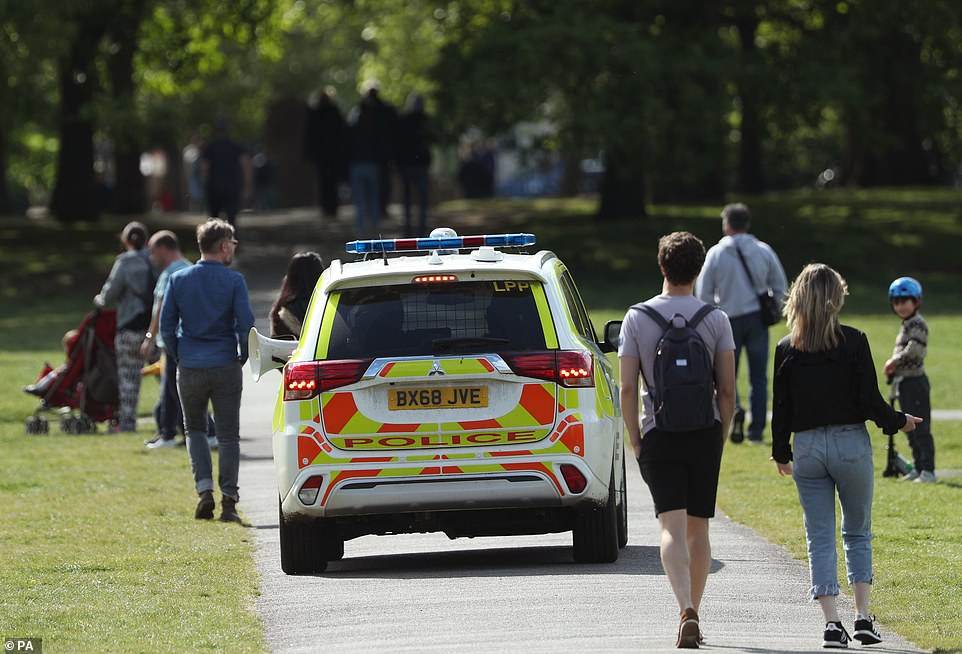 Police officers in a patrol car using a megaphone in Greenwich Park, London, this weekend to ensure people are keeping to lockdown rules during spell of warm weather 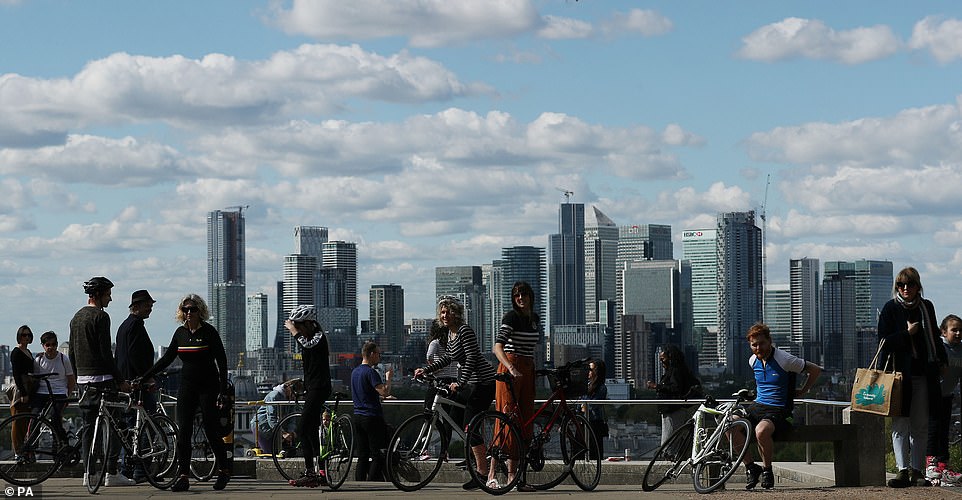 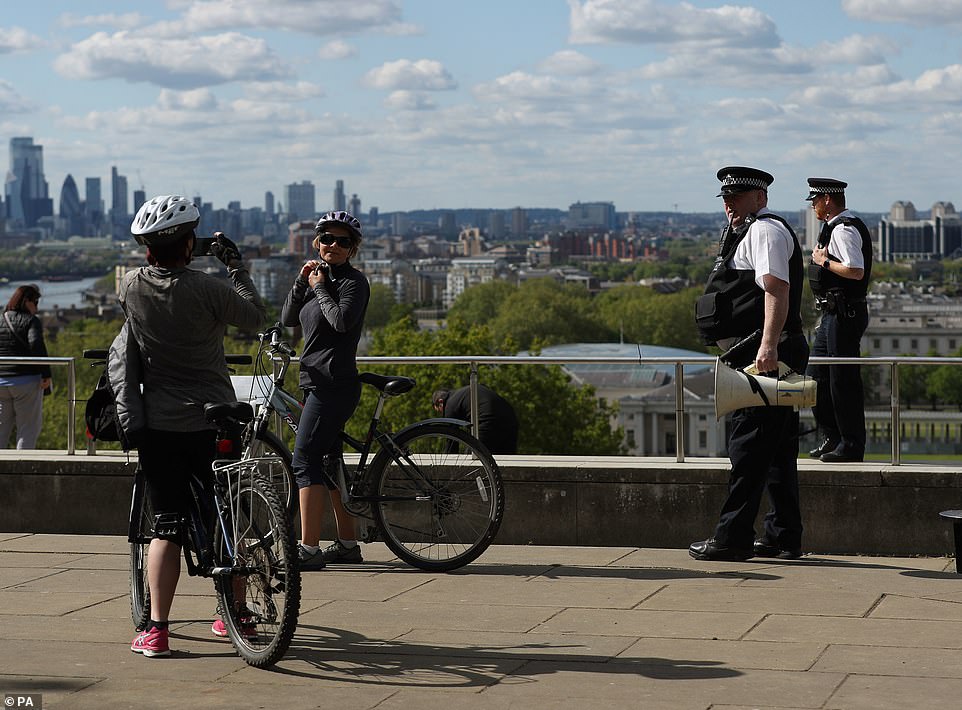 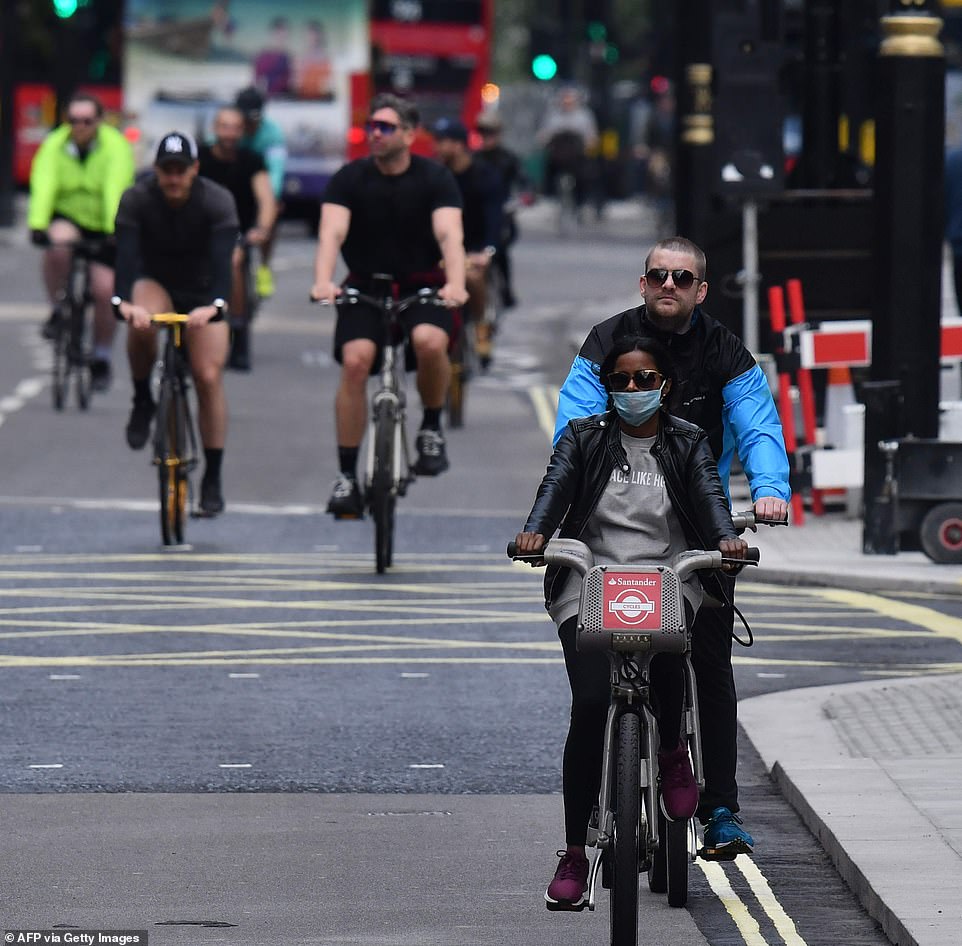 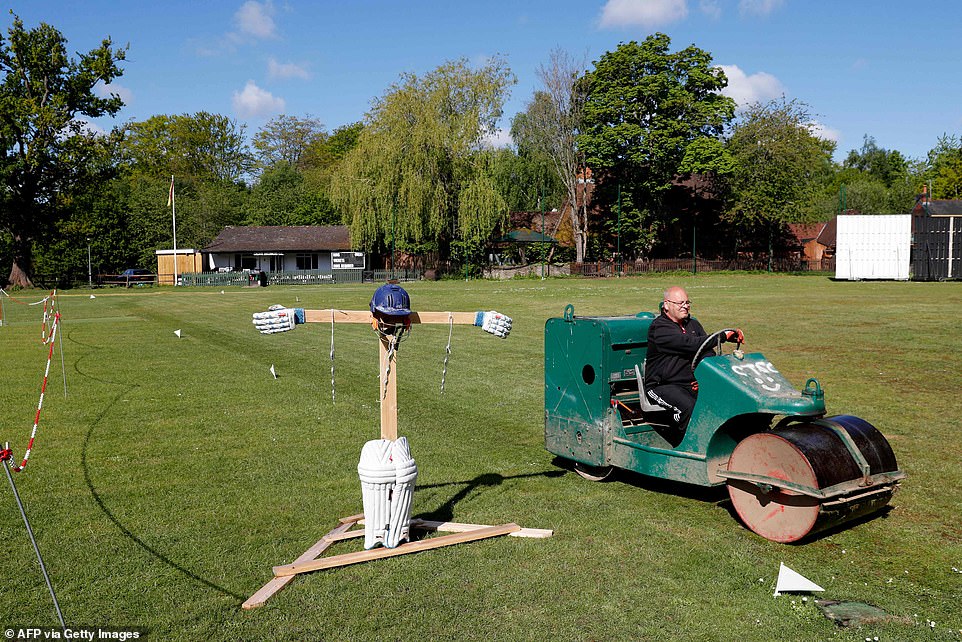 Gary O’Hara, volunteer groundsman drives a roller on the ground past a cricket-themed scarecrow at Crown Taverners Cricket Club in Camberley, Hampshire, today 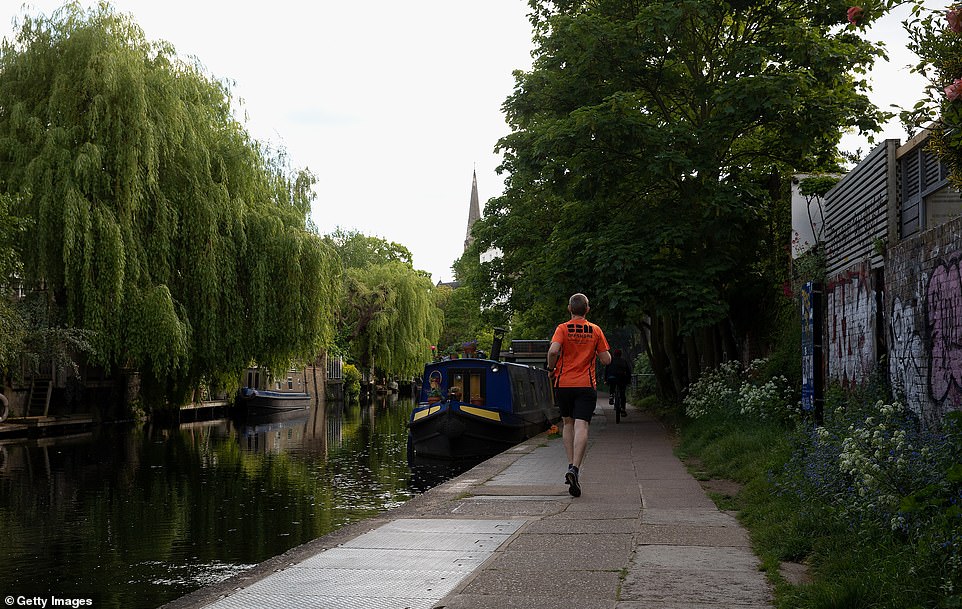 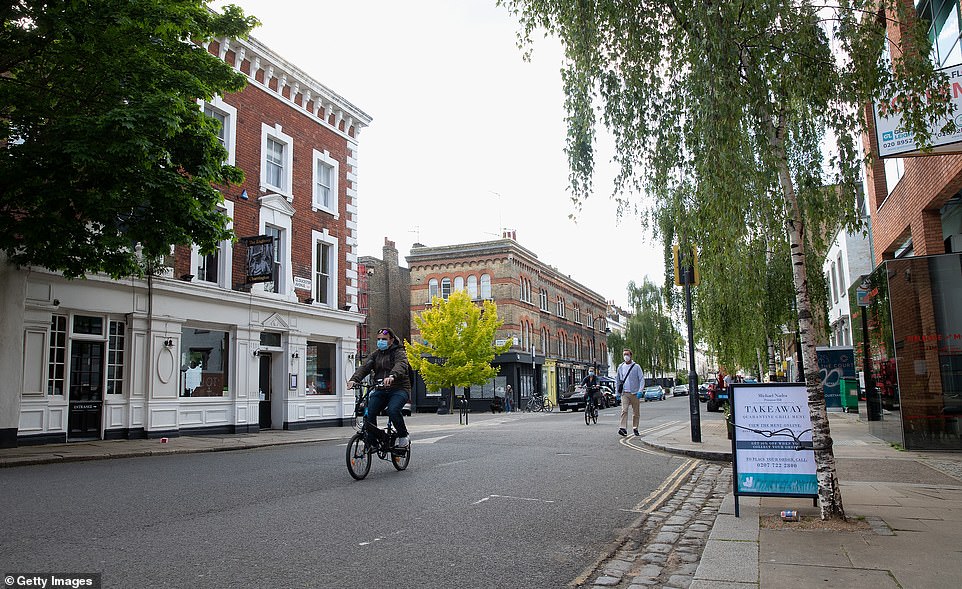 Areas of London remain extremely quiet as people are staying at home amid the coronavirus pandemic. A masked cyclist rides past the closed Engineer Pub in a quiet Primrose Hill Road 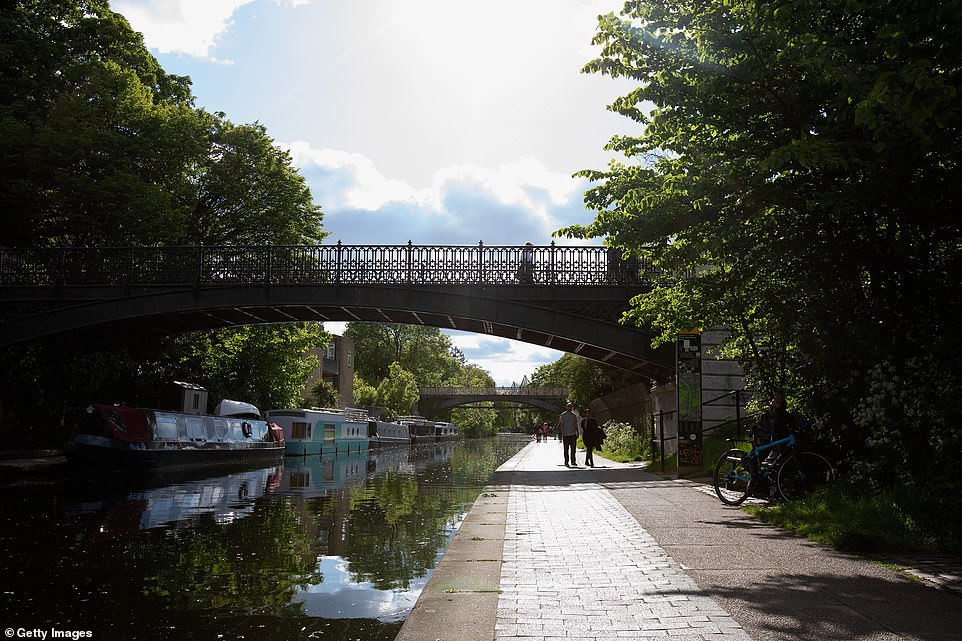 There were sunny spells at Regent’s Park this weekend as a couple walk along and enjoy the sunshine. The park was quiet as people are keeping to social distancing rules

‘The maximum temperate will peak somewhere around 62F or 63F somewhere in the south, possibly London, and some clouding will build across the far southwest through the course of today.

‘Rain will affect parts of Cornwall and Devon overnight and further north there are clear skies and some frost for parts of Wales, Scotland and Northern Ireland. It will be generally cloudier for Scotland and parts of England overnight.

‘Into Sunday morning there are some cloudy conditions across eastern parts of England and Scotland and some showers through the night with clear skies in between.

‘There will be a mixture of sunny spells and dry weather further north with some afternoon showers with some on the sharper side. 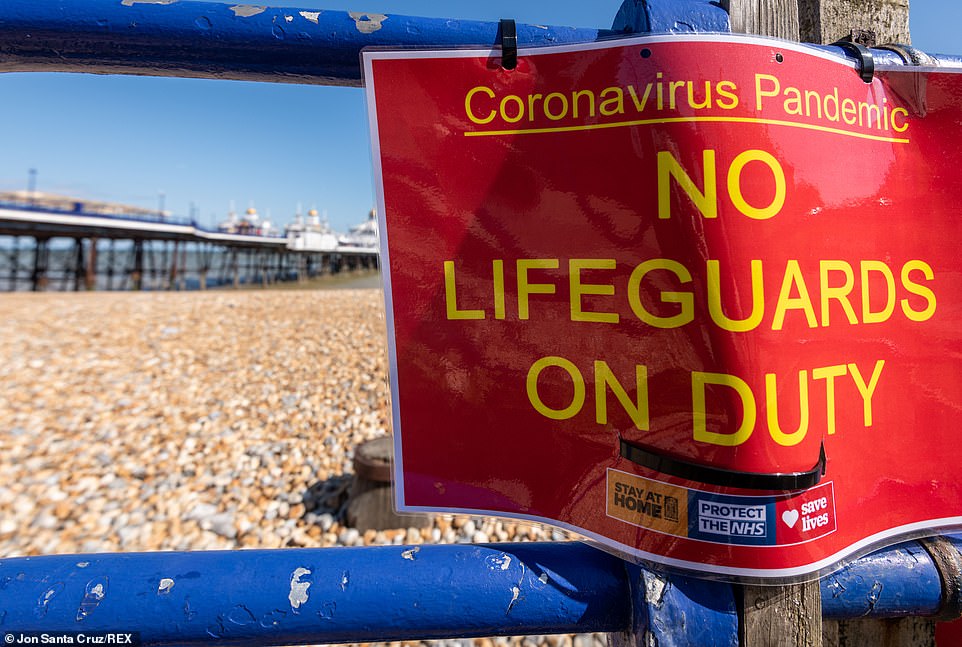 There were blue skies in at Beachy Head in Eastbourne, East Sussex, as signs warned would-be swimmers that no lifeguards were on duty 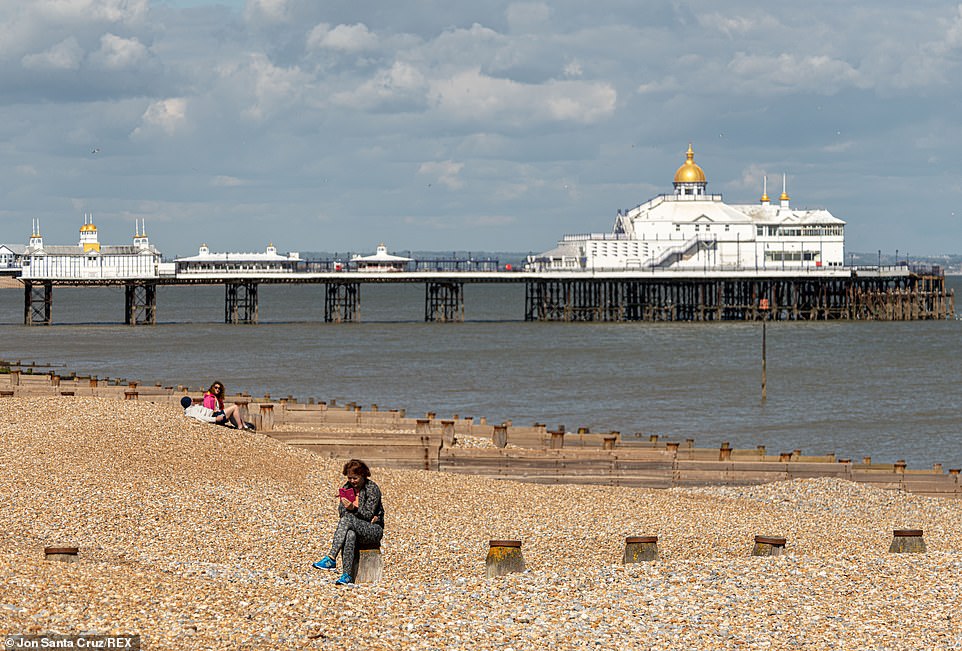 The seafront in Eastbourne was largely empty, bar one or two sun-seekers who were pictured sitting on the stony beach 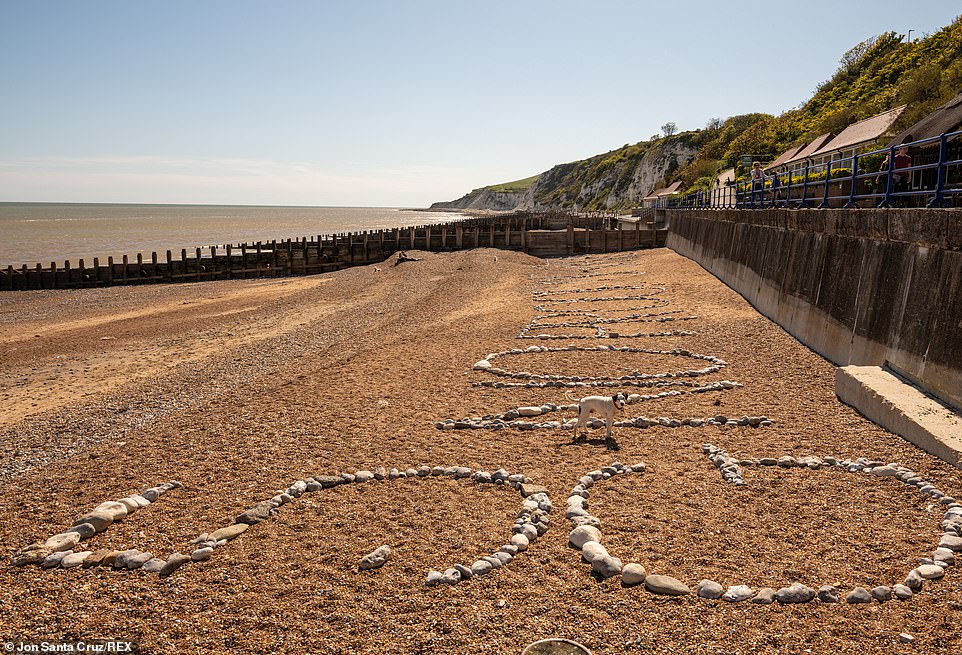 One beach-goer had compiled a sign out of stones which read, ‘5G no proof of safety’ 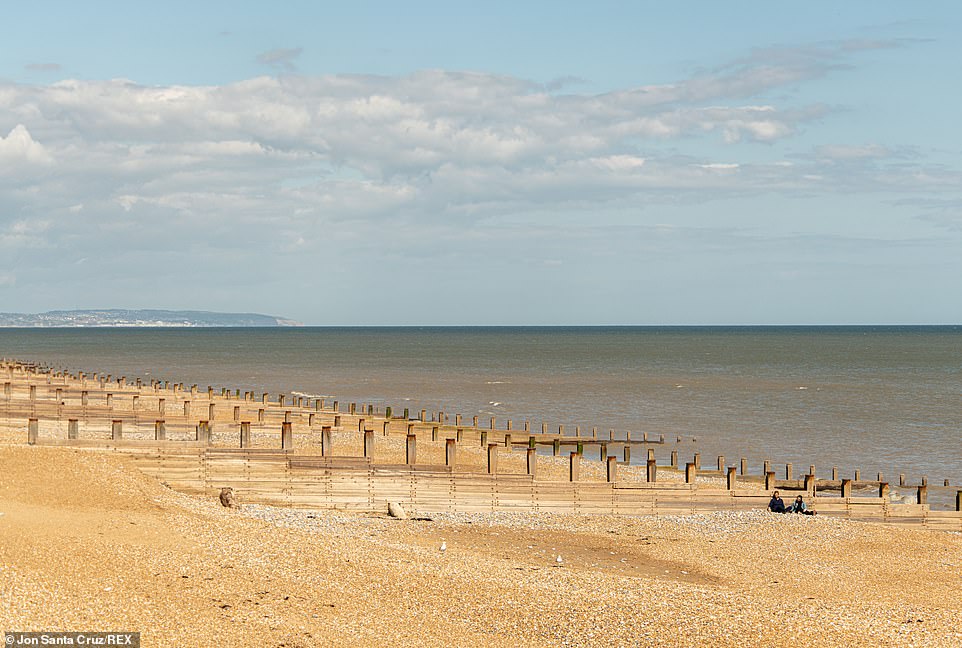 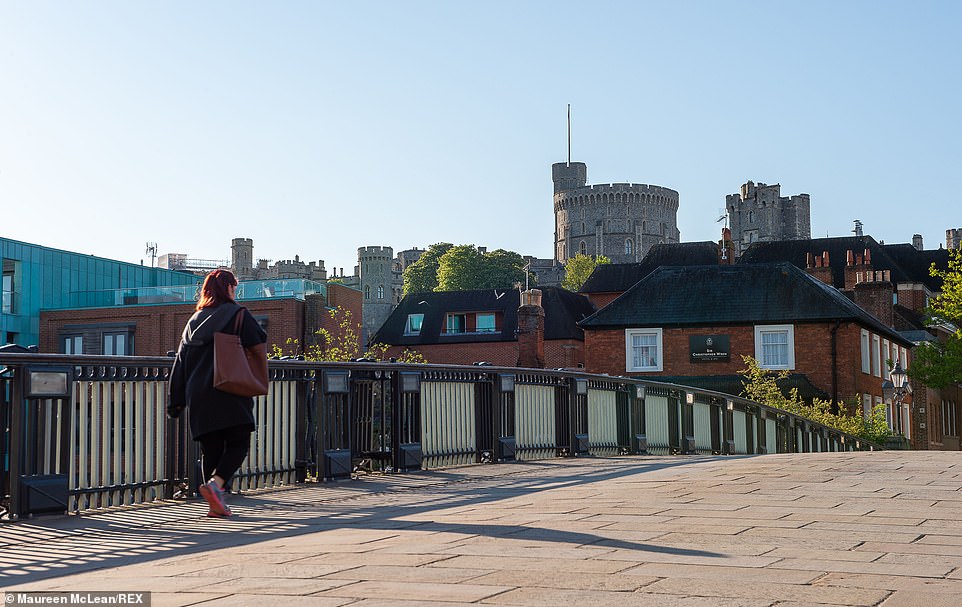 The sun was shining in Windsor, Berkshire, early this morning as the wet weather clears and temperatures soar to 65F 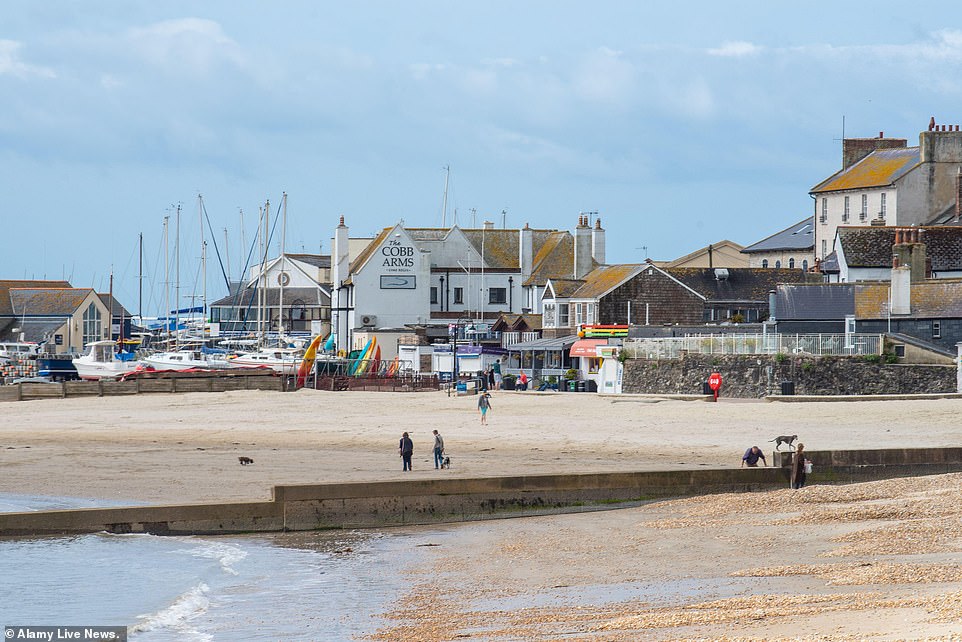 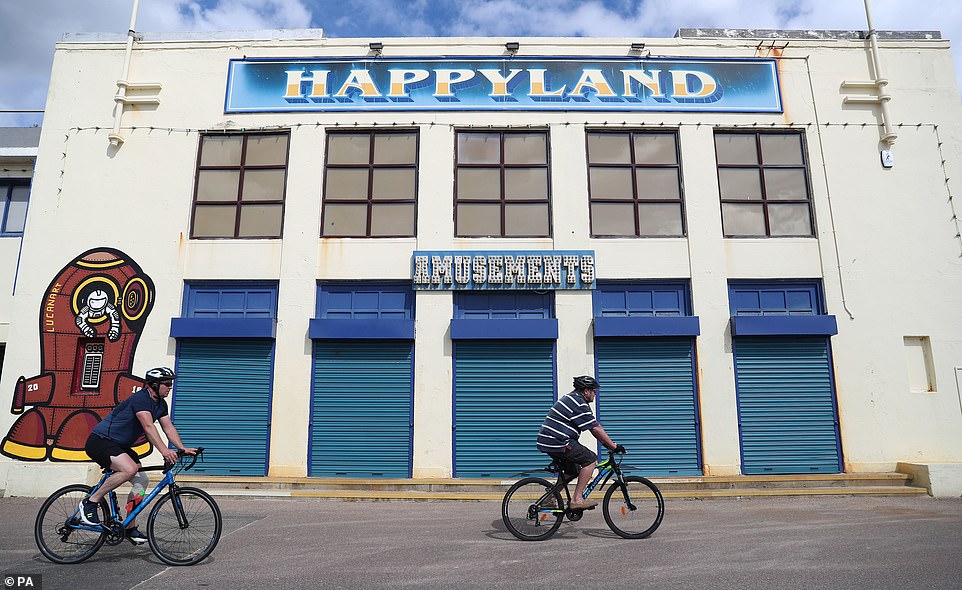 People cycle along the beach front in Bournemouth, Dorset, today

‘For the rest of Sunday it is cloudy for the southwest, particularly the southwest peninsula, with some drizzle through the morning which should tend to die back throughout the day.

‘The further north you go, for parts of the Midlands, eastern and north England, Scotland and Northern Ireland there are sunny spells with some scattered showers.

‘Sunny spells will develop in the southeast of England through the course of Sunday with a maximum temperature peaking at around 66F.’

Last month was the sunniest April on record for the UK, the Met Office has confirmed.

The country received an average of 224.5 hours of sunshine, comfortably beating the previous record of 211.9 hours set in 2015.

The Isle of Wight was the sunniest location, clocking up 279 hours of sunshine during the month.

It was also the fifth warmest April on record, with a mean temperature of 9.1C across the UK.

The warmest April on record was in 2011, when the mean temperature was 10.7C.

Last month was a dry one for the country, with the UK receiving only 40% of average April rainfall.

It was the third driest April on record for Scotland, while a number of counties in north-east England and eastern Scotland saw their driest April.

The weather station at Morpeth in Northumberland had its driest April in 126 years of recording.

Dr Mark McCarthy, head of the Met Office’s National Climate Information Centre, said: ‘Although April 2020 will be remembered for being the sunniest April on record in England and the UK, along with the sunshine, the month was largely dry with mean temperatures well above average for most parts of the UK.

For the beginning of next week the weather still appears setting with the occasional shower in Eastern England on Monday ad heavy showers in the southwest on Tuesday.

Generally the UK will remain dry with some sunny spells, particularly on Wednesday. The sunshine comes after Britain experienced as much rain in a day as it did for the rest of April two days ago.

The beginning of May will be largely dry with some light winds and temperatures slightly above average with pleasant sunny and bright spells for most of the country.

Rain is most likely to return to western areas with the weather likely to turn more unsettled further into the month, with a gradual increase in spells of rain and showers with intermittent sunny spells.

The heaviest rainfall will be in southern regions with the unsettled weather continuing until the middle of the month where there is the chance of seeing some drier spells.

Despite the heavy rainfall in the last few days of April, the UK still only received 40% of average April rainfall.

Some 20.6 mm of water fell in Rochdale, Greater Manchester, despite what the Met Office is calling the sunniest April on record for the UK.

Rutland in eastern England was the sunniest county, receiving 172 per cent of the average April sunshine the Isle of Wight had the highest number of sunshine hours with 279 hours.

The north east coast was particularly dry, with just 2.4 mm of rain recorded for Tyne and Wear, just five per cent of normal, while the weather station at Morpeth in Northumberland had its driest April in 126 years of recording.

Weather experts said it was significantly warmer than average for most of the country and the fifth warmest April on record.

Daytime maximum temperatures were particularly higher than normal thanks to some long clear sunny days during the month.

Oxfordshire and Berkshire daily maximum temperatures were 39F above the long-term average with many areas in southern England and Wales seeing temperature more than 37F above average.

Dr Mark McCarthy, head of the Met Office’s National Climate Information Centre, said: ‘Although April 2020 will be remembered for being the sunniest April on record in England and the UK, along with the sunshine, the month was largely dry with mean temperatures well above average for most parts of the UK.

Reviewed By This Is Article About Britons flock outdoors in their thousands for the return of lockdown sunshine was posted on Sunday, May 3rd, 2020 have 5 stars rating.

Seasonal Specials Spice Up or Sweeten Your Cup of Joe

These social distancing measures are certainly inventive (and sometimes hilariou…