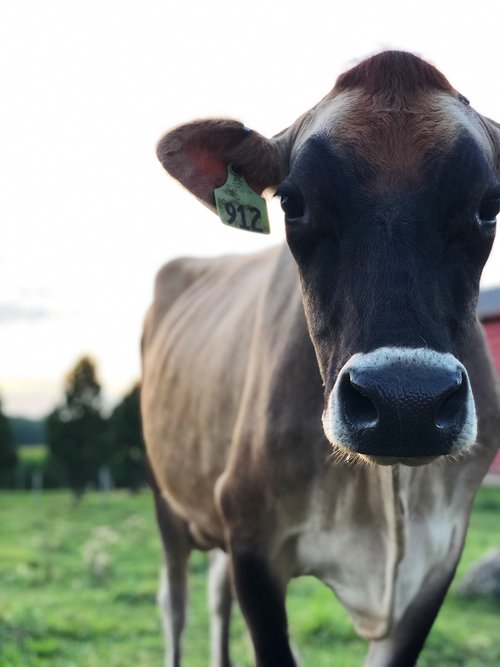 One of the more than 120 Jersey cows that make up the herd at High Lawn Farm in Lee, one of the few remaining fully operational dairy farms in Massachusetts. Photo courtesy High Lawn Farm

Lee — Growing up in Lenox, I was jealous of my cousins who had milk from High Lawn Farm delivered each week to the insulated metal box on their front porch; even more enviable than the glossy, glass bottles with flimsy foil caps was the cream plug that clogged the bottle’s round opening. I was not a coffee drinker at the time and instead enjoyed eating the cream by the spoonful when no one was looking.

In the more than three decades since, High Lawn Farm — Berkshire County’s captive source of pure Jersey milk since 1923 — has evolved at a steady clip while myriad dairy farms across the state have folded. The newest addition to the sprawling 1,600-acre property on the corner of Route 7 and Summer Street is the Farmstead Creamery, which opened at the end of June. A panoply of new products from hand-shaped butter bars and cultured ghee to a diverse array of farmstead cheese complements the farm’s traditional dairy products and features an ice-cream window. Visitors are invited daily from 10 a.m. to 8 p.m. to visit the cows, ingest the breathtaking scenery, and enjoy an ice cream cone at one of the picnic tables dotting the lawn.

“[This is] such a beautiful place, [it’s] a shame not to share it,” said Raphael Gimbert, who greeted me and my kids upon our arrival. Gimbert, who hails from France, brings 20 years’ experience running restaurants in the Berkshires to his role as manager of the store. “We are selling a lot of ice cream,” he told me on Monday afternoon. “Two-hundred fifty scoops alone yesterday,” he added as a heat wave swept the county. My daughters and I enjoyed a farm tour — my first ever despite having lived here for the past 40 years — before devouring Blueberry Velvet ice cream from waffle cones. (The blueberries were local, delivered by a neighbor just days before.)  “It never ends,” Roberto Laurens Sr. told me, adding, “that’s why we keep progressing.”

Laurens, who was trained as an agronomist at university in Colombia, is general manager of High Lawn Farm, a position he’s held for close to two decades. When he is not managing the herd of roughly 120 Jersey cows (that provide in excess of 7,000 pounds of milk each day, or 813 gallons, give or take), he’s overseeing the on-site production of farm products. High Lawn does not sell its milk to a co-op; instead, it supplements its herd’s supply from other Jersey producers to churn out a growing list of products: more than 26 distinctly different items, not counting each flavor of ice cream (a number that hovers around 10 on any given day for scooping, 15 in prepackaged pints).

The story of High Lawn dates back 150 years when Elizur Smith of Sandisfield built the farm on what was considered “poor acreage”; modern founders Col. H.G. and Mrs. Marjorie Field Wilde acquired the farm in 1923 and carefully built a herd from the very best of the breed with an eye to production progress. The farm’s nationally recognized excellence in Jersey breeding and milk production began with the foresight and vision of the Wildes, whose contributions to the genetic improvement of the breed over many decades were honored multiple times. Master Breeder awards from the American Jersey Cattle Association were conferred upon Col. Wilde in 1960 and to Mrs. Wilde in 1977, making them the first couple to ever receive the award in separate years.

While hot weather sees an increase in ice cream sales, it equates to a decrease in milk production. “With heat and humidity, the cows get desperate and don’t want to eat,” Laurens explained. That said, they keep cool in the open-air barn and instinctively queue themselves up to enter the milking parlor where a pair of impressive robots identify each cow and create a custom milking routine to suit her anatomy. Two teats out of commission? The robot knows this, and springs into action to accommodate. “They learn when it’s time,” Laurens told us — and the robot will not accept a cow who is not yet ready — adding, “no matter the time of day, even at 3 a.m., there is always someone being milked and someone waiting.” As to the dying art of milking by hand? “It’s impossible to find anyone who can do it anymore,” Laurens said, acknowledging that he could milk one cow if he had to, but not 20. An on-site, state-of-the-art processing plant operates three days each week.

High Lawn was hit hard by the pandemic; its response: “Creating a sense of community — as people turn to [local] businesses] — now more than ever,” said Laurens. The mid-March interruption of the customer base — including eight universities and more than 80 coffee shops and restaurants — resulted in a surplus of milk, much of which has been diverted to the growing line of specialty products, which Roberto Laurens Jr. oversees. “You can’t copy cheese,” Laurens Sr. said, citing the terroir — or distinct characteristics of the land on which the cows graze — as heavily influencing the Trappist-style washed-rind cheeses his son makes. His is a story in itself, and his depth of knowledge, gleaned through extensive training in Vermont as well as with input by advisors in the field, makes for some captivating stories: namely, the fact that “each cheese evolved from the day-to-day activities of our ancestors.”

Before summer wanes, make the trip to High Lawn Farm. “We welcome everybody,” Laurens Sr. said in a nod to the farm’s strong tradition of welcoming a diversity of people from all over the world. Follow the tree-lined section of Route 7 north to the wrought-iron gated main entrance on the corner of Summer Street (no longer in use) and then look for hand-lettered signs. Or if all else fails, head toward the clock tower — which dates back to the 1800s when it was built to house a fire suspension system — which is still wound by hand each week on Monday. “It takes eight minutes,” Laurens said, but you’ll want to spend far longer on the farm soaking in the lush scenery, visiting the calves in the nursery and peeking inside the old hay barn if you’re lucky enough to find the museum open. “We are trying to show the next generation — we want them to know how it used to be in the past,” Laurens Sr. said, a taste of which you might just get by wending your way to Lee and experiencing the past — and present — of High Lawn Farm for yourself.

Reviewed By This Is Article About High Lawn Farm dairy responds to pandemic by creating community was posted on Thursday, July 23rd, 2020 have 5 stars rating.