Home › Coffee Beans › How a brand new craft brewery near Yosemite is thriving despite pandemic, fires

How a brand new craft brewery near Yosemite is thriving despite pandemic, fires

Around the Horn co-owner Rachel Sabatine pours a beer.

Around the Horn co-owner Rachel Sabatine pours a beer.

If three years ago somebody had mentioned to Rachel and Andrew Sabatine that a pandemic and apocalyptic fires were coming, they might have decided against launching a craft brewery. But nobody told them, so they went right ahead and dedicated their late 20s to Around the Horn Brewing Company, a Gold Rush-themed brewery they dreamed of opening 25 miles from Yosemite National Park’s Big Oak Flat entrance.

Upon learning of the time and effort that the couple poured into their goal, one might assume that the events of 2020 have them regretting the endeavor. One would be wrong.

Thanks to a bit of luck and a lot of dedication, Around the Horn not only opened, but is thriving in 2020, providing tasty, original beer and a bit of levity to the residents and visitors to Groveland who kind of need it right now. 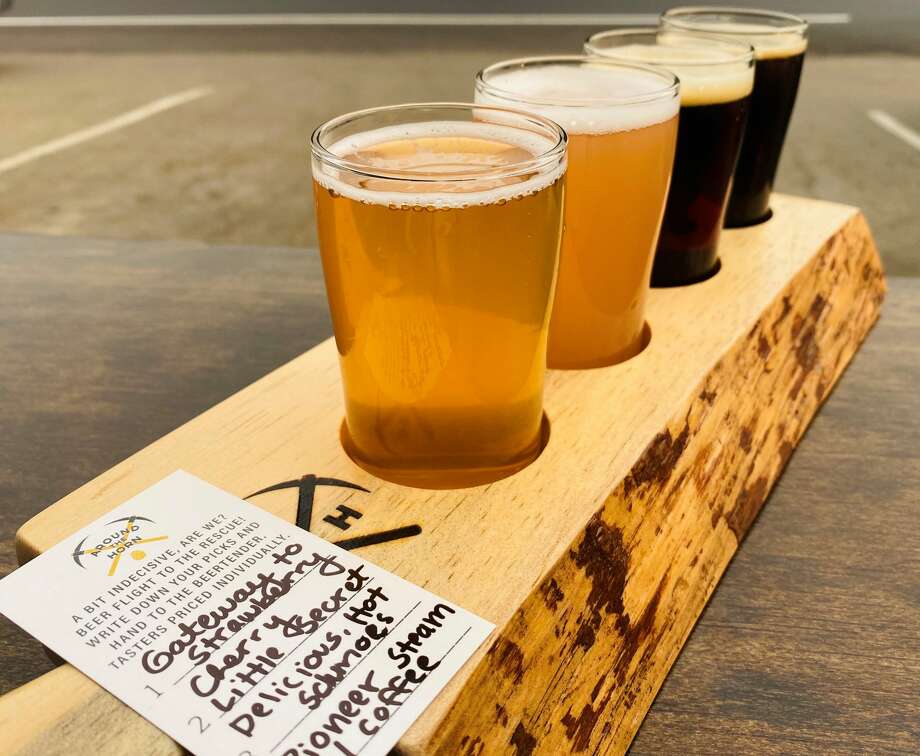 A flight of beer at Around the Horn Brewing Company.

A flight of beer at Around the Horn Brewing Company.

The idea for Groveland’s first brewery was hatched in 2014, when Rachel and her mom Shirley Horn went on a tour of a brewery in San Diego and joked that they should open one. They agreed that Groveland, where Horn had a home, was an ideal spot due to its close-knit community, pure Hetch Hetchy water and lack of any other craft brewery.

Over the next two years they found themselves “joking” about the idea more often, Rachel says, and by 2016, Rachel’s partner Andrew — whom she met in the beer line at a Chris Young concert — was also in on the joke. Rachel and Andrew had lived in Los Angeles too long, and they envisioned a future in a smaller, more laid-back place, with epic nature. In 2017, they got married and started talking seriously about opening a brewery, which felt exciting, so they went for it.

The couple quit unsatisfying jobs in real estate and tech, and identified Nashville as an ideal city to learn their business. Rachel took the GMAT and got accepted to Vanderbilt University for her MBA, where she studied entrepreneurship and marketing. She also interned at a local brewery and worked as a bartender at a beer bar and as a brand ambassador for Brooklyn Brewery. Andrew got jobs at three Nashville breweries (TailGate, Honky Tonk and Southern Grist), eventually becoming a taproom manager and then a brewer’s apprentice. He also completed a brewing and distilling technology program at Knoxville’s Brewing & Distilling Center and scored a 104% on his final exam, for which Rachel labeled him a “freaking nerd.” 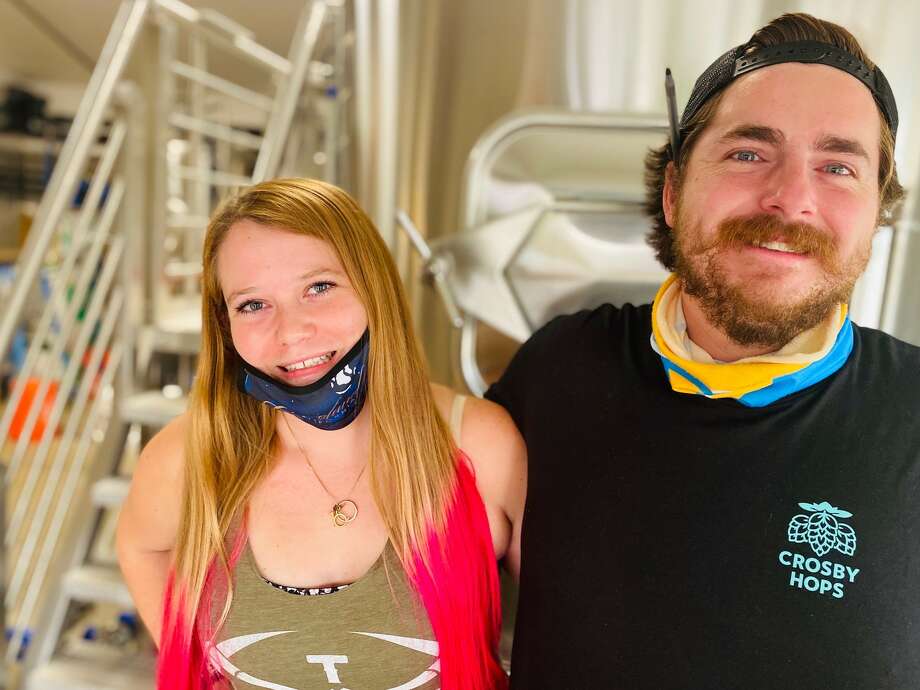 Rachel and Andrew Sabatine started Around the Horn Brewing Company (along with Rachel’s mom Shirley Horn) in the middle of a pandemic.

Rachel and Andrew Sabatine started Around the Horn Brewing Company…

After they graduated in 2019, Rachel and Andrew relocated to Groveland, and along with Horn found and purchased what locals referred to as “the old Subway building” at 17820 State Highway 120. The Sabatines hoped to close on the building in September, but soon learned it would take longer and cost more than they had anticipated.

“We struggled for more than a year to secure our building, extending our opening time by months,” Rachel wrote on an Indiegogo page she created to help fund the business. “And with every vendor quote, permit and insurance bill, our expenses grow.”

The deal finally closed in December, and in early 2020, the Around the Horn team began transforming the indoor area from a sandwich franchise to a community brewery — a costly process Rachel refers to as “de-Subwaying.” Meanwhile, the budding, meticulous brewmaster Andrew started on his first round of craft beers. Using a seven-barrel brewhouse and four fermenters, he began with Gateway to Gold, a Kolsch-style ale, and I’m Fine, Everything’s Fine, a New England pale ale. He also launched Tip Top Lollipop, a series of fruited sours brewed with more than 500 pounds of rotating fruits. The first one: passion fruit peach. 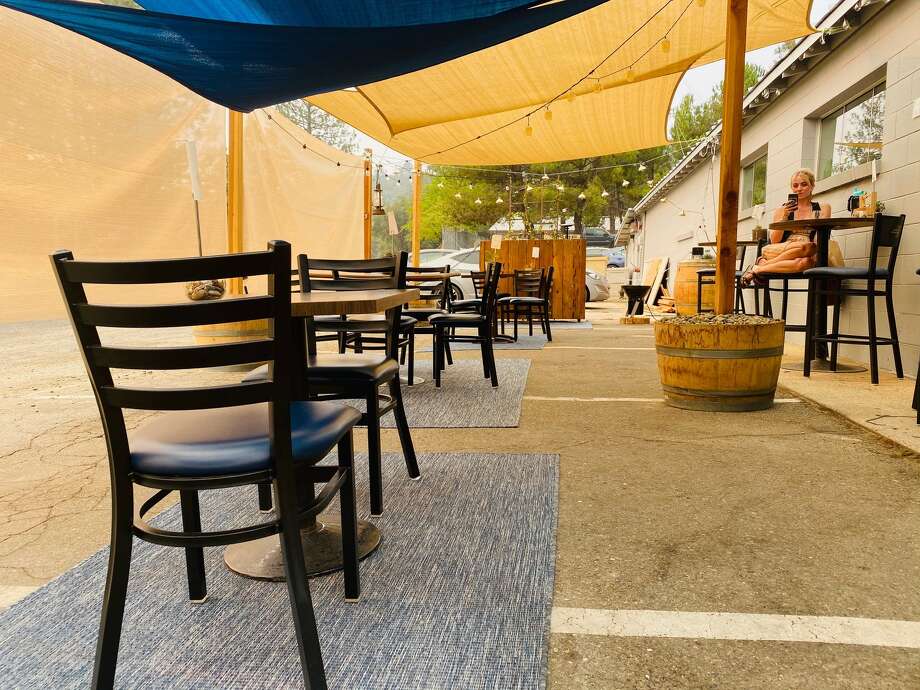 The cozy side patio at Around the Horn Brewing Company.

The cozy side patio at Around the Horn Brewing Company.

On March 19, Around the Horn was still a couple of months away from opening, and that was the day Gov. Gavin Newsom issued a statewide stay-at-home order, shutting down all nonessential businesses and restaurant dining. Surprisingly, the timing ended up working to the Sabatines’ advantage.

“The fact that we missed the first wave of the shelter-in-place meant we could see how other businesses reacted and learn from them,” Rachel says. “We could be more agile and adapting.”

Recognizing they would need outdoor space, the Sabatines converted much of their parking lot into a dining and drinking area. They created a front patio with bar seating and a charming side patio with tables spaced out beneath sun shades and fairy lights, along with an outdoor area for Cornhole. They also bought a machine that makes Crowlers (“it’s like a growler and a can had a baby,” Rachel explains) so that patrons could take the beer to-go.

In July, a few days before the grand opening, Newsom announced that all dining in California would need to take place outside. Luckily, the Sabatines had already applied for a temporary permit allowing the sale and consumption of alcoholic beverages in outdoor areas like patios, parking lots and on sidewalks. They also displayed signs with instructions about mask-wearing and social distancing. “Seriously it took us like five years to open this business,” one says. “Please help us keep it open by wearing your mask and following the state/county guidance. Thanks … we appreciate y’all.”

For the mid-July opening, the local community came out en masse: friends, families, tourists, everyone. Merch flew off the shelves, and the 500 Crowlers the Sabatines ordered sold out in a single weekend, with some folks buying as many as eight at a time. The couple has since placed two additional orders.

“They’ve done such a good job accommodating all the new guidelines,” said Jordan McLaurin, a Sonora resident who visited the brewery recently with her fiancé. “They have the space to do this right, and they can spread people out. It feels less COVID-y than other places, but it doesn’t feel thrown together.”

For a few weeks, state regulations required guests to purchase a meal with every beer. And while that certainly didn’t hurt the brewery’s bottom line, it did annoy some patrons. Once people tried the food, though — with items like spiced chickpea pitas, a Cuban sandwich with thick bacon and an adult ice cream float — they tended to stop complaining. The beer selection at Around the Horn Brewing Company.

The beer selection at Around the Horn Brewing Company.

Business was booming for Around the Horn right up until Aug. 20, when fires erupted all over California. The Moc fire broke out near Highway 49 and Highway 120, quickly spreading across 2,800 acres, threatening 1,500 homes and forcing Groveland to evacuate. Rachel didn’t want to leave her new baby business behind.

“It felt like that scene in ‘Titanic,’ when the captain is in the steering room and he goes down with the ship,” she tells SFGATE.

California Highway Patrol officials told her the evacuation was mandatory, and she reluctantly packed her most important belongings. The evacuation lasted five days, and the power was out the whole time, which was long enough to spoil $5,000 of food, Rachel says. When the power and the internet came back, the Sabatines were able to see through cameras that their business and home were still standing. Best of all, “our beer was fine, which was miraculous,” Rachel says.

Salvaged beers included Pioneer Steam with Coffee — a field milk stout steeped with whole coffee beans — and Delicious Hot Schmoes — an ode to Buzz Lightyear’s mispronunciation of s’mores in “Toy Story 2.” The imperial brown ale is brewed with more than 100 pounds of marshmallow, 100 pounds of crushed graham crackers and plenty of vanilla to “round out all those flavors, and bring it home,” Andrew says.

In gratitude to the first responders who protected the Groveland, Andrew brewed a lightly hopped golden ale called Fire Saga Strong. Half of the proceeds from that beer are going toward Wildland Firefighter Foundation, a nonprofit that helps the families of fallen firefighters. The other half will be put toward an effort to purchase fire warning sirens for Big Oak Flat, Groveland and surrounding areas, Rachel says.

Two weeks after the fire, PG&E conducted power outages to prevent more fires from starting in the area, and the Sabatines again stood to lose their food. Staff at Rush Creek, a relatively new lodge with powerful generators, stepped in and offered to store the food there. 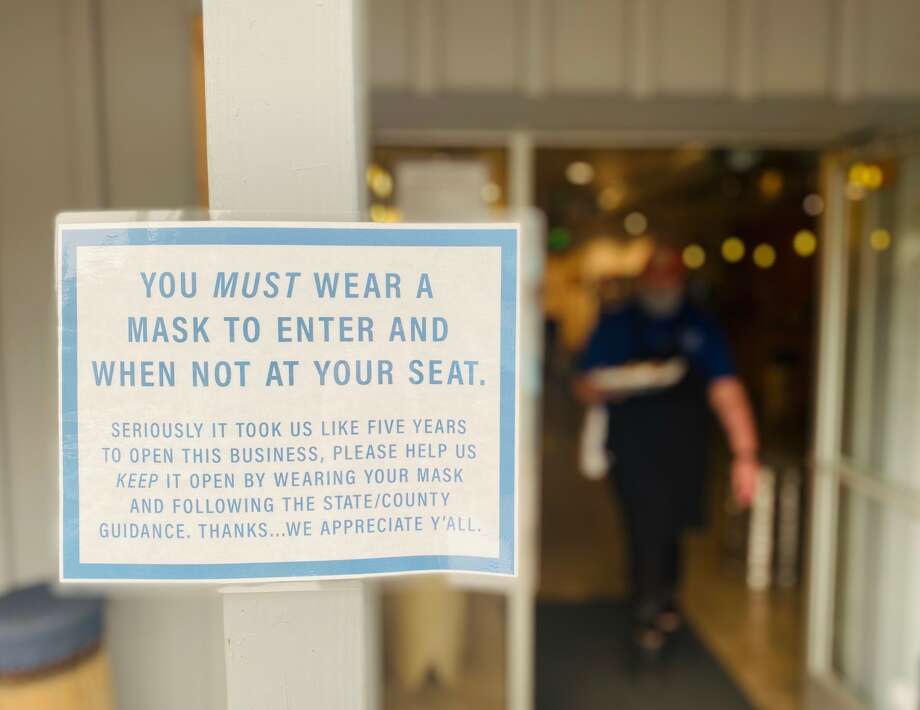 Masks are not optional for those venturing inside Around the Horn Brewing Company in Groveland.

Masks are not optional for those venturing inside Around the Horn…

“They’re super nice,” Rachel says. “But it’s now painfully clear to me that we need a generator, and I’m shopping for one.”

Through all of the challenges, the Sabatines have found ways to adapt, working hard and powering through. They’ve got everything on the line, Rachel says, and that feels scary sometimes. But when customers come in, kick back with a delicious beer and have a moment to enjoy life, Rachel says all of her doubt disappears.

“At least I know that everything we do, all the tears and frustrations and annoying phone calls, are so we could do something for ourselves, for our dream,” she says. “Not someone else’s.”

Around the Horn Brewing Company is located at 17820 Highway 120 in Groveland, California. Hours are 11 a.m. to 10 p.m. Thursday through Monday.

About "How a brand new craft brewery near Yosemite is thriving despite pandemic, fires"

Reviewed By This Is Article About How a brand new craft brewery near Yosemite is thriving despite pandemic, fires was posted on Wednesday, September 16th, 2020 have 5 stars rating.

Woodstock business offers work experience to those recovering from addiction

If you’re after truly great-tasting coffee, you might want to put down that tabl…