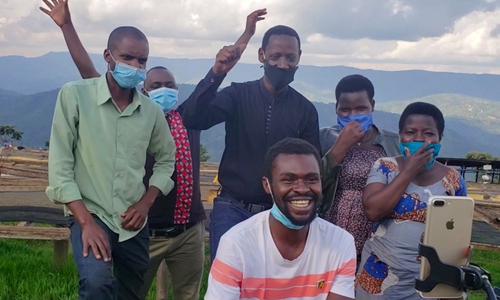 Rwandan coffee farmers cheer after they know one and half tonnes of coffee are sold out in a second during a livestreaming promotion at a Chinese online shopping platform on May 14, 2020. (Xinhua)

Three thousand bags of coffee beans from Rwanda Farmers Coffee Company were sold out in a second on Thursday’s online promotion via livestreaming after Wei Ya, an internet popularity in China, announced the start of auctioning to over 10 million viewers.

“It was very impressive seeing about one and half tonnes sold in a second, it is amazing,” coffee farmer Ernest Nshimiyimana on Friday recalled the experience when watching the promotion on T-Mall, an online shopping platform of China’s ecommerce-giant Alibaba.

Nshimiyimana living in northern Rwanda’s Gakenke district is one of 4,000 farmers who provide coffee to the coffee company.

However, there has been a lot of anxiety about the coffee market among farmers in Rwanda following the measures put in place against the COVID-19, the farmer said, adding that Thursday’s event addressed their fears and restored their hope.

“Being able to market coffee to millions of customers in live streaming removes the barrier between a farmer and final customers,” he told Xinhua.

Facilitated by the Alibaba’s Electronic World Trade Platform (eWTP) initiative, the promotion aimed to help Rwandan coffee farmers pull through difficulties caused by the COVID-19 impact as well as provide more good products around the world to Chinese consumers. It also aimed to support small and medium enterprises and help them resume the trade.

Rwanda Farmers Coffee Company was significantly affected by the current COVID-19 epidemic, as countries across the world have imposed restrictions against the virus and the shipping cost of cargo flights has sharply increased, the company’s managing director David Ngarambe revealed.

Farmers who supply coffee to the company are also affected due to decline in sales, he said.

The food value chain within Rwanda avoided the impact during the COVID-19 outbreak as food trade continued, but transportation of exports was hit, spokesperson of National Agricultural Export Development Board Pie Ntwali told Xinhua.

“It’s imperative as promotions through live streaming sales, with the participation of social media influencers, is a very important strategy to raise awareness of Rwandan coffee in China,” said the spokesperson.

E-commerce is more needed during the current COVID-19 epidemic and through the cooperation under the eWTP, Rwandan farmers can earn 4 more US dollars per kilo on T-Mall since their coffee are sold directly to consumers, according to Rwandan ambassador to China James Kimonyo.

Speaking in Ethiopia’s Addis Ababa, Under-Secretary-General of the United Nations and Executive Secretary of the UN Economic Commission for Africa Vera Songwe gave her “shoutout” for selling Rwandan coffee in a video message displayed during the promotion, envisaging selling-out of more goods from African countries like Cameroon, Mali, Senegal and Madagascar through the partnership.

COVID-19 is wreaking havoc across the world in particular Africa, and it is also endangering and stopping global trade, she said in a separate video message during another T-Mall’s livestreaming-based online promotion on Thursday, which introduced Chinese consumers products from different countries including Rwanda, Belgium and Chile.

It is particularly important at the time when the global world is closing down that China and Africa continue trade, because “that is the only way that we can build a prosperous world and a prosperous Africa, together with China,” she said.

Rwanda and Alibaba launched the eWTP in October 2018, making Rwanda the first African country to launch the platform.

The eWTP was proposed by Jack Ma, founder of Alibaba, in 2016. It aims to set up an open platform for private enterprises and coordination among international organizations, governments and social groups which focus on the development of SMEs as well as trade.

Reviewed By This Is Article About Livestreaming promotion in China opens gate for African products during COVID-19 epidemic was posted on Saturday, May 16th, 2020 have 4 stars rating.

Spotty internet, neck pain, needy pets: The weirdness of working from home in the coronavirus age

After one day working from home, Diana Zaslaw’s neck hurt. She started Monday in…