Under an amended public health order taking effect Aug. 29, New Mexico is also doubling its cap on social gatherings to 10, while a requirement that New Mexicans wear face masks in public remains in place.

The latest public health orders loosen some of the state’s restrictions aiming to slow community spread of the SARS-CoV-2 coronavirus, which causes COVID-19 disease. A previous, partial reopening in June was followed by sharp increases of disease spread during the summer, prompting the state to take a step back in July.

The limit on indoor church congregations increases on Saturday from 25 percent to 40 percent of the building’s fire code occupancy limit, with provisions for allowing participants to maintain six feet of distance from other individuals.

Additional requirements for places of worship under state Department of Health guidance include avoiding shared use of hymnals and other items, collecting tithes and offerings online or in collection boxes, and discontinuing singing or chanting in order to limit respiratory droplets that spread the illness.

Restaurants, cafes and coffee shops, and breweries, wineries and distillers will now be permitted to seat customers indoors at 25 percent of their fire code occupancy limits, and the limit for outdoor seating increases to 75 percent occupancy, with tables spaced six feet apart and no more than six patrons at a table.

State parks continue to be open for New Mexico residents only, and limited to day use.

Museums that maintain static displays may reopen at 25 percent of their permitted occupancy, but not facilities with “interactive and/or immersive” displays, which means escape rooms, Meow Wolf and similar establishments remain closed. 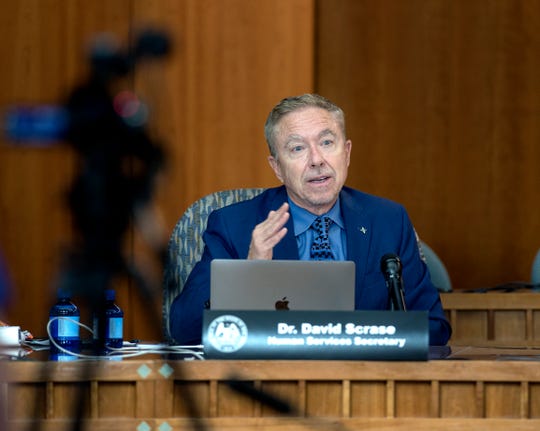 New Mexico Secretary of Human Services Dr. David Scrase takes part in the update on the COVID-19 outbreak in New Mexico and the state’s effort to deal with it. The news conference is being held at the Roundhouse in Santa Fe, Thursday August 27, 2020. (Photo: Eddie Moore/Albuquerque Journal)

Places of lodging are still limited to 50 percent of their capacity, excluding healthcare providers or individuals quarantining or on extended stays.

The amended order expires after Sept. 18, although changes may be made sooner.

The easing of restrictions on restaurants and other eateries came days after a tough jobs report showing New Mexico reached 12.7 percent official unemployment in July, up from 8.4 percent the previous month and higher than the national average of 10.2 percent.

The new restaurant occupancy limits were criticized as arbitrary by the state Republican Party, which claimed in a statement, “There’s no ‘science’ to choosing this number.”

Republican Chairman Steve Pearce commented that the Democratic governor has “been pushing the envelope on what’s legal and constitutional throughout this economic crisis,” although on Wednesday the state Supreme Court ruled unanimously to vindicate the administration’s authority to restrict indoor dining in a public health emergency.

As Justice Judith Nakamura announced the decision from the bench, she said: “It’s well established that differing opinions does not make an action arbitrary and capricious.”

The easing of restrictions on public gatherings follows recent downward trends in the disease’s spread, and the state meeting its gating criteria for reopening schools, based on the rate of spread, the hospital system’s resources and preparedness for outbreaks, speed of contact tracing and the rate of positive testing. 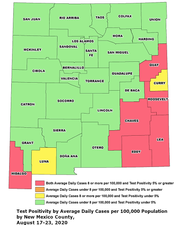 The majority of New Mexico counties rated “green,” meaning that between Aug. 17 and 23 they reported fewer than 8 daily cases per 100,000 people and had a test positivity rate of under 5 percent.

For statewide and local reporting, subscribe to the Las Cruces Sun-News today.

The green rating means scheduled visits at long-term care facilities in those counties may begin, and that public schools with re-entry plans approved by the state Public Education Department may resume limited in-person services for K-5 students after Labor Day.

Gov. Michelle Lujan Grisham said reopening would begin with the youngest students because they represent the greatest need for in-person services, at the beginning of their schooling.

Those reopenings would assume a “hybrid model” in which students participate in remote or classroom instruction in rotation to limit gatherings. 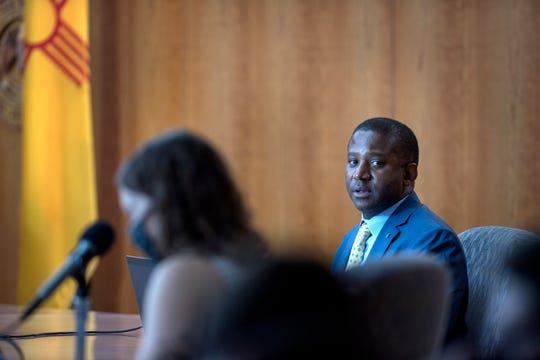 New Mexico Secretary of Public Education Ryan Stewart talks about the possibility of schools returning to in-person learning during the update on the COVID-19 outbreak in New Mexico. This is during a news conference at the Roundhouse in Santa Fe, Thursday August 27, 2020. (Photo: Eddie Moore/Albuquerque Journal)

The academic year opened for remote learning earlier in August, but at the news conference, state Education Secretary Ryan Stewart acknowledged serious gaps in broadband connectivity and/or electronic devices presented the state with serious challenges as to relying on virtual learning platforms.

School districts in six “red” counties — Chaves, Eddy, Hidalgo, Lea, Quay and Roosevelt — are not eligible to reopen. Those counties, five of which are in eastern New Mexico near Texas, averaged eight or more daily cases per 100,000 and had a test positivity rate of 5 percent or more.

Noting that 24 public school districts and charter schools in New Mexico had voted not to resume in-person instruction before winter break, the governor said Thursday that no district would be required to reopen.

Algernon D’Ammassa can be reached at 575-541-5451, adammassa@lcsun-news.com or @AlgernonWrites on Twitter.

Reviewed By This Is Article About New Mexico’s new health orders begin; some schools may reopen was posted on Sunday, August 30th, 2020 have 5 stars rating.