Caputo Brothers Creamery in Spring Grove has partnered with Troegs Brewing in Hershey for a Mad Elf beer cheese collaboration.

Zane Schott was sitting in the break room at Caputo Brother’s Creamery in Spring Grove when he had a rather Homer Simpson-esque moment.

Schott, who’s been a cheesemaker at Caputo Brothers since 2017, was sampling a new beer cheese he had just helped create — the Mad Elf beer cheese.

The fromager saw some doughnuts left over from a colleague’s birthday celebration and opted to blend a slice of Mad Elf cheese with a chocolate doughnut he had procured. The combination was — well, a game changer.

Schott brought the idea to Rynn Caputo. During a final tasting with Tröegs Brewing in Hershey, Caputo said they brought two wheels with them. One regular and one with a chocolate-coffee rub on it.

“I didn’t think they’d go for chocolate cheese,” she said.

Turns out, the Tröegs team loved it and only suggested that for the coffee they should use Little Amps Coffee Roasters in Harrisburg for the espresso portion of the rub. The Caputo team was already using Hershey’s cocoa for the chocolate. Calicutts Spice Co., another Hershey-based company, helped finalize the recipe for the rub.

“We wanted to do something a little different,” Tröegs co-owner John Trogner said. “How do you provide something new and unique? Collaborations [like this] allow us to get out of our comfort zone.” 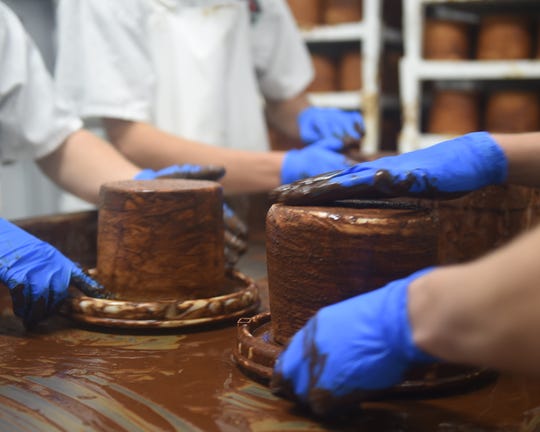 Once the Mad Elf beer cheese wheel is hardened in its mold, workers will apply a coffee and chocolate to the wheel. Workers will finish about 650 wheels per week. Each wheel weighs about four pounds, according to Rynn Caputo of Caputo Brothers Creamery in Spring Grove. The cheese, which is part of a collaboration with Troegs Brewing in Hershey, is finished with the cocoa and coffee rub using Hershey’s cocoa and coffee grinds from Little Amp Coffee Roasters, also in Hershey. (Photo: Neil Strebig, York Daily Record)

The Mad Elf mash-up isn’t the first time, Tröegs and Caputo Bros. have teamed up, however. The two central Pennsylvania businesses have teamed up the last two years on the Tröegenator Beer Cheese and the Perpetual IPA beer cheese, which are both sold exclusively at Giant Food Stores.

The partnership came about in 2018 as a means to help save Pennsylvania dairy farms. For each beer cheese purchased a dollar is donated to the participating farm. This year the teams are working with Barrens View Farm in Dillsburg, Caputo said.

“Dairy farms are the lifeblood of agriculture in the state,” Trogner said.

Barrens View Farm supplies the cheese curds to Caputo Brothers. The curds are then soaked in Mad Elf beer, then sit and molded for shape in another batch of Mad Elf. Once they’re taken out of their respective molds, the cheese wheels will rest and two coats of the chocolate-coffee rub will be applied, by hand, for the finishing touch.

Over 25,000 pounds of cheese later, nearly 6,000 wheels of Mad Elf beer cheese have been made this year, Caputo said.

“We’re a pretty small, and this is a massive project and helps us save another dairy farm,” she said. “It’s a lot of passion because we have to keep it going and there’s no safety net. If we don’t take the milk, no one else will.”

Who says you can’t have beer for breakfast?

It’s all the buzz this holiday season: Breweries who have collaborated with local coffee joints to create the perfect cup of joe, with just the right amount of alcohol.

Start It Up, a joint venture with Workhorse Brewing Company in King of Prussia and Saxbys Coffee in Philadelphia, is a popular porter available for purchase online in the fall and winter. 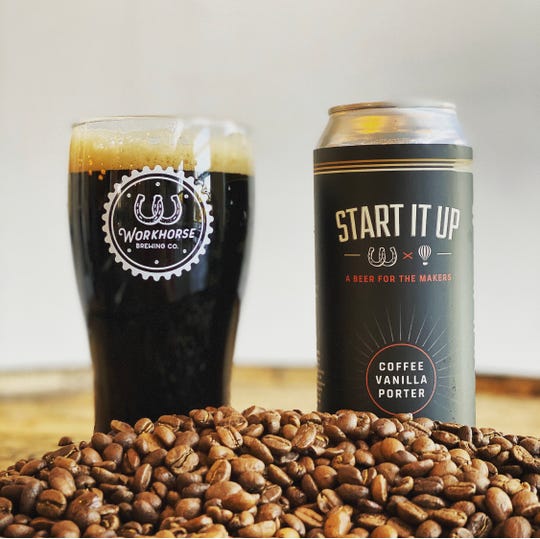 Start It Up, a collaboration between Workhorse Brewing Company and Saxbys Coffee, is a popular winter porter. (Photo: Photo provided)

Made with real vanilla beans and Saxbys’ Pep Talk, a medium roast featuring coffee beans from Brazil, Colombia and Guatemala.

“Last year, we did one limited release and it sold out immediately. We were kind of kicking ourselves for not doing it longer,” Workhorse co-founder Dan Hershberg said. “We’re doing more of it this year and we decided to make it a super seasonal, which basically means we’ll brew it for a few months.”

“One of the things I love about the Christmas-style and holidays beers is the roasted malt component — those winter warmers if you will — the roasted character is what helps cut through the cold weather,” he said. “Saxbys blend is a medium roast, but when we do the extraction, it kind of brings out that roasted flavor, so the beer, even though it’s a light ABV, it’s not a syrupy rich porter or stout, but it’s got that really nice toasted note to it, and a lot of coffee.”

Skip the Guinness and try Neshaminy Creek Brewing Company’s After The Party, an Irish Dry Stout brewed with English Maris Otter malt and conditioned on Rise Up Coffee, based out of Maryland.

Adding coffee into barrels of beer is the last step in the brewing process in order to maximize the flavor and notes of the beans. 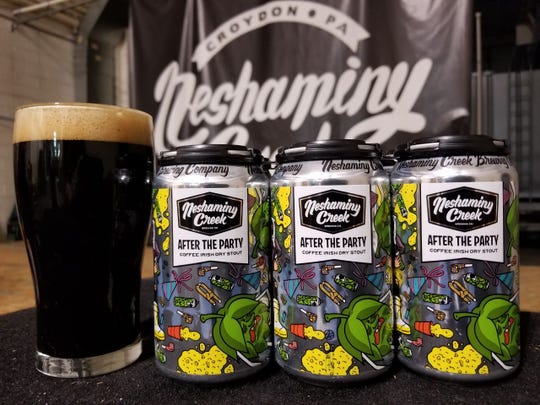 After The Party is an Irish dry stout made with Rise Up Coffee and brewed by Neshaminy Creek Brewing Company. (Photo: Provided)

“We brewed the beer already and will add in the coffee this week,” Steve Capelli, founder of the Croydon-based brewery said. “It will be 120 pounds of Timor coffee beans from Rise Up going into a 40-billion-gallon batch of our Irish stout.”

With the cold weather, means one of Yuengling’s 2019 favorite returns — Yuengling’s Hershey Chocolate Porter —this year in bottles.

The limited-edition beer quickly sold out last year and had some short runs on a few drafts at local pubs and restaurants across the state. This year, Yuengling announced it would be offering the porter across its entire 22-state footprint.

“Last year we were overwhelmed by the excitement and passion expressed by our fans for our first-ever collaboration beer,”  Yuengling VP Jennifer Yuengling said in a statement regarding the expanded run.

Neil Strebig is a journalist for the York Daily Record and curator for the York on the Move newsletter. He can be reached at nstrebig@ydr.com, 717-825-6582 or via Twitter @neilStrebig.

Reviewed By This Is Article About Pa. craft breweries partner with small businesses for holiday beers was posted on Tuesday, November 24th, 2020 have 4 stars rating.

In Texas, where did the Native American communities go? In most western states, …

Established in 1995, Caffè Vita is well known in Seattle as a homegrown coffee c…

Because this section is free of charge, community events are subject to run base…