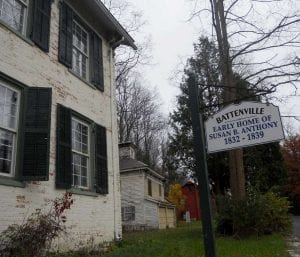 On the 100th anniversary of the passage of the 19th Amendment, which granted women the right to vote, State Parks and community leaders joined to celebrate a $695,000 stabilization project at the 19th century brick home in Washington County, where suffragist Susan B. Anthony spent part of her childhood.

Work at the deteriorated 1832 two-story brick home on Route 29 in Battenville where Anthony lived from ages 13 to 19 includes repairs to the roof, masonry and drainage, as well as mold remediation and water damage, is expected to be completed this fall.

State Parks has a purchase agreement on an adjoining four-acre site that contains a former historic tavern dating to the period when the Anthony family lived next door. Supported by the state Environmental Protection Fund, the $130,500 purchase will allow for future creation of adequate parking for the Anthony home and serve as a staging area for continued phased redevelopment of the building for an as-yet undetermined future use. 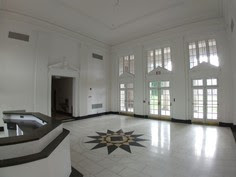 Parks Commissioner Erik Kulleseid headed up the grand reopening of the historic Roosevelt II Bathhouse at Saratoga Spa State Park in Saratoga County as part of a $2.3 million restoration project. First opened in 1935 by former New York governor and President Franklin D. Roosevelt, the iconic Georgian Revival-style bathhouse had been closed since the 1980s.

The bathhouse’s historic lobby has been restored, new restrooms installed, new heating, ventilation and plumbing systems added, and toxic asbestos removed. The center’s new coffee shop is being operated by Saratoga County-based Wired Coffee, which currently runs cafes in Malta and the city of Albany.

Future plans include use of a portion of the facility by the not-for-profit group COESA, which will offer retreat experiences and classes in personal well-being, leadership, meditation, professional wellness training, and work-life balance. Learn more

Photo at top: The property where Susan B. Anthony grew up in Battenville, part of Greenwich, NY, in October 2012. (Photo provided by Lisa Boehle/Albany Times-Union file photo)

Stories under the Almanack’s Editorial Staff byline come from press releases and other notices.

View all posts by ?

Reviewed By This Is Article About State Parks office announces historic restoration projects – was posted on Thursday, September 10th, 2020 have 4 stars rating.

Blazing the trail to lifelong learning