We’re halfway through spring in New York and the excitement of the city reopening is beginning to feel tangible. This week we had our first in-person art fair, as Frieze New York opened to visitors at The Shed in Hudson Yards. Many of the visitors were chomping at the bit to see art in the company of other people. But as the pandemic is far from over, many public talks and dialogues are still online.

Earlier this week, I participated in one of them, debating whether or not artists have a duty to make work that is socially aware. Though the conversation was wonderful and fascinating and went on for close to an hour, I had a really short answer. No. I don’t think an artist has a duty to make any particular kind of work, especially not born of any societal expectation. That’s my rapid, drive-through response.

But I’ve continued to think about the question, and because it is more complex than my one-word answer would suggest, I wanted to tease out something I do think an artist has a duty to do: to listen for and honour the work that wants to be born.

In truth, it is only a fairly recent phenomenon for societies to look for any correlation between one’s skill at artistic creation and one’s moral obligation towards society. Perhaps this is one reason why artistic freedom is considered so invaluable in (western) modernity in a way different from past historical periods, when makers were either seen as skilled labourers and craftsmen, or as artists beholden to patrons and used to depict pre-approved narratives to maintain a prescribed social order.

Artists can serve the priestly function of making the invisible visible, their work proclaiming truths and revealing to us what we fail to see

We often look to the arts as a yardstick of a society’s health and awareness. Artists can serve the priestly function of making the invisible visible, proclaiming truths through their work and revealing to us what we either fail or choose not to see, or a prophetic function, imagining a reality that may be coming based on the reality of what currently is. This is why art can be a dangerous calling. There is a reason why global history is replete with stories of imprisoned or disappeared artists.

The arts can be a potent means of shaking and uprooting unjust structures of power. And yet the art that activates our imagination and changes our beliefs is created by artists who make work out of their own convictions and inspirations, not because of a moral sense of duty.

To make art — be it as a visual artist, a writer, a musician — is to be in conversation with both one’s will and that ineffable creative spirit. Most artists will tell you that making work is a mix of discipline, craft and mystery; that there are aspects of bringing the thing within their imagination to some tangible form that can’t be fully explained.

I am taken by the work of 48-year-old New Jersey-based contemporary American artist Bisa Butler. She uses west African wax-printed fabric and Kente cloth to quilt vibrant textile images of African-American subjects, telling stories of black identity that she feels compelled to put into the world. They are stunning visual narratives, gorgeous, arresting and impressive, but at a cursory glance they may not appear to address social issues — unless a viewer places her pieces in the wider historical context of black life in America.

In her 2019 work “Kindred”, Butler has sewn a small black family, quilted and appliquéd in cotton, silk, wool, velvet and polyester. There’s a mother and a father with two daughters perched on their laps. The family is huddled up together, the father’s leg extended in front of his wife’s body, as though he is creating a barrier between her and the world. His left arm is draped casually but protectively around one of his daughters. He is claiming his family as he gazes directly out at the viewer, his mouth closed and set in a firm, almost daring, line.

Toni Morrison believed her work was about ‘bearing witness’, not ‘attempting to solve social problems but .?.?. to clarify them’

Sometimes we cannot know the extent to which an artist’s work builds on important issues because, as viewers, they may be issues we’ve never had to deal with in our own cultures or communities. But I see Butler’s depiction of a black family, an African-American family, claiming themselves as a unit, as a powerful reminder of the historically embedded factors that continue to threaten the sustainability of black family life in the US.

I think of the late Toni Morrison, who explained in her essay “The Source of Self-Regard” why she chose to write about a love story set in the post-reconstruction era in her 1992 novel Jazz. She was reflecting on the radical notion of previously enslaved black people suddenly having the freedom to choose who to love and who to have a family with, after the centuries-long horror of slavery, when black families lived with the daily reality that at any moment they could be torn apart either by punishment, death or by being sold.

Morrison believed that the function of her work was about “bearing witness”, about showing what “is useful from the past”, what needs to be “discarded”, and “about making it possible to prepare for the present .?.?. not by attempting to solve social problems, but . . . to clarify them.”

In Los Angeles-based artist Ferrari Sheppard’s 2020 exhibition Heroines of Innocence, several large-scale works depict black family life and memories of childhood. In “I Like Coffee, I Like Tea”, four girls are in a circle, three holding hands and spinning around while one ducks playfully beneath them. Hair in pigtails and bows, sporting spotless white dresses, pink shoes and raspberry socks, their faces don’t have to be seen for us to conjure up their delight.

It is easy to think of similar images we’ve seen of little girls playing outside. But because of the cultural and geographical location of this work, it is also easy to be reminded of moments in history, of black girls whose innocence was lost.

On seeing it, I thought immediately of the four young schoolgirls killed in the 1963 church bombing in Birmingham, Alabama. It also made me think about the reports put out in recent years by the Georgetown Law Center on Poverty and Inequality, which found that black female children are often treated by teachers and authority figures with less compassion and care than their white counterparts. Black girls as young as five years old are seen as “less innocent” than white girls of the same age. So when a black girl makes a mistake, her behaviour is likely to be judged as unruly, rather than as simply childlike. 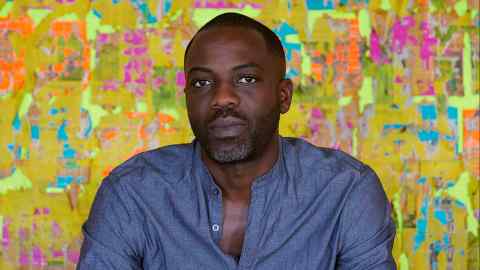 Images like Sheppard’s could help to effect a public re-narration of black girlhood that might change how black children are seen, understood and treated. But again, it would be easy to simply gaze at a painting such as “I Like Coffee, I Like Tea,” and make no assumption about its relevance beyond its aesthetic qualities.

Part of the gift of a work of art is how it invites conversation between itself and a viewer. Rather than attempting to lay claims on the artistic imagination and the artistic call, it is our own imaginations that must often be reclaimed, expanded and challenged by our engagement with art. We can only look towards wherever a particular artist is pointing, receive their version of truth-telling, and then decide what, if anything, we will do with it.

About "When art isn’t just for art’s sake"

Reviewed By This Is Article About When art isn’t just for art’s sake was posted on Friday, May 7th, 2021 have 4 stars rating.

Espresso drink fans get four U.S. stamps for their favorites