Everything’s a wake-up call these days: politics, public health, social justice. But being woke starts with being awake, and these five new San Antonio coffee shops are here for it: Cultura, Laika Cheesecake & Espresso, Revolución Coffee + Juice at The Rim, Tandem and Toro Coffee.

Forget that they all opened in the bleak winter of a pandemic. For entrepreneurs like Anthony Benavides of Cultura, there’s no stopping a vision fueled by coffee: “If you’re meant to do it, if it’s in your cards, you’re gonna do it, pandemic or not.” Consider this your wake-up call for waking up. 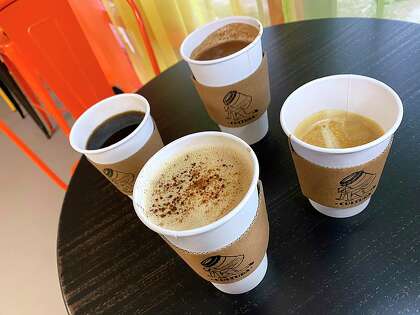 Benavides traded a career in special education to chase the dream of opening a coffee shop on the deep South Side where he grew up. Cultura is the culmination of that dream, a Bohemian place to get a strong cup of house blend from What’s Brewing Coffee Roasters, pick up some costume jewelry from his mom and co-owner Rosemary Benavides and appreciate art from local creators like Andrew Salinas and Kat Hinojosa.

Some of Cultura’s best shots include a Oaxacan latte like hot chocolate for grownups, a cortado with the perfect balance of espresso and steamed milk and an horchata latte that brings out the glow of cinnamon spice with a kick like caffeinated eggnog.

On ExpressNews.com: Your guide to 7 great new coffee shops in San Antonio 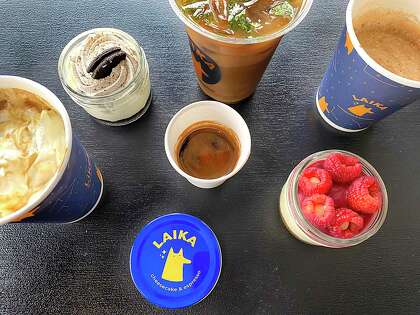 Laika was the first dog to orbit the Earth, back in the ’50s when the former Soviet Union was locked in a Cold War space race with the United States. Laika never came home, and her bittersweet legacy inspired Ukraine native Anna Afanasieva and Viktor Krizma from Slovakia to name their Alamo Heights cheesecake bakery and espresso shop in her honor.

Laika’s stylized little face adorns every petite screwtop jar of cheesecake at this shop, flooded with light and color from full-length windows that face Broadway across from Central Market. The cheesecake’s good, enriched with a rotating parade of flavors like Oreo and raspberry white chocolate.

And while cheesecake comes first in the name, Laika’s espresso game is strong, drawing on Italian beans from Lavazza for a wicked double espresso. The same beans fuel coffee creations as decadent as the cheesecake, led by a rich and creamy Tres Leches Flat White latte and a Spicy Cuban that’s milky, strong and sweet. The best coffee here comes from a cocktail shaker, where fresh mint leaves marry with ice, espresso and cream for a nonalcoholic cross between a mojito and a white Russian. 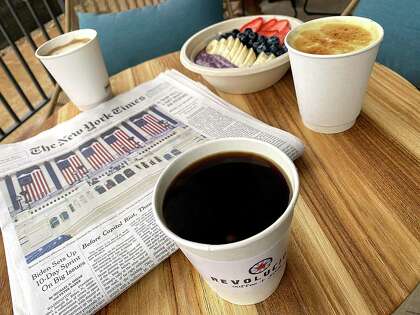 Never mind that the Starbucks a few hundred yards away was 12 deep in the drive-thru. Revolución is the little local engine that could, full to capacity on its third day at its third San Antonio location, a soaring citadel at The Rim that includes a rooftop hangout.

Revolución cares about charging your batteries, not just with caffeine, but with fresh juice and health-conscious food, too. I got my morning jolt from a Guatemalan-Ethiopian blend roasted by Revolución that tastes like Fruity Pebbles in a cup.

I followed that with a Chagaccino, a cappuccino infused with mushrooms. Weird as its sounds, those mushrooms gave an earthy grounding to a frothy blend of espresso, cocoa and cinnamon. Then I mellowed out with a Turmeric Latte that radiated golden rays of Eastern spice and a paint-by-numbers PB & Jelly Acai Bowl full of bananas and berries that tasted as bright and righteous as it looked.

On ExpressNews.com: 7 great restaurants for Philippine food in San Antonio 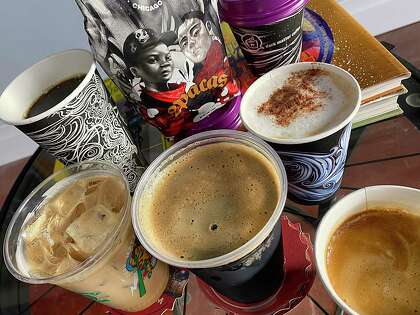 With the Mission hike-and-bike trails nearby and plenty of room to spread out inside and on the broad courtyard out back, Tandem is positioned to be the kind of all-day hangout the South Side could use more of. There’s coffee, including the cult favorite Dark Matter out of Chicago, there’s local beer on draft and there are snacks from solid local providers like Fat Tummy Empanadas and The Bread Box.

Those Dark Matter beans? They’re worth their weight in gold, which is good, because they cost about the same. But you deserve it. 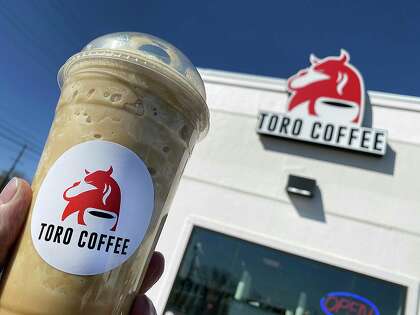 Primed for speed and for the social distancing of the new abnormal, Toro Coffee does its thing exclusively at the drive-thru, with a window on each side of this white box building near Rackspace on the Northeast Side. This is the first of several to come in San Antonio, said general manager Mario Mantilla.

The model might be drive-thru only, but the result is as good as a full-on coffee shop, starting with the Tropical Toro, blended cold and frosty with espresso, white chocolate, macadamia nut and coconut. The Toro Stinger is hot stuff, a latte propelled by espresso and amplified with cinnamon and honey. And because of a nice San Francisco blend from What’s Brewing Coffee Roasters, Toro’s Americano is a dark force to be reckoned with.