Twice published Author Jason Roe has had a new-found realization of how to roast coffee beans using no electricity, or gas whatsoever. Four Seasons is experiencing record-breaking coffee sales using the breakthrough specialty coffee roasted emission free. Moneys from coffee bean sales go to H-Mar for Hawaiian Marine Rescue. Women Owned, its President and COO did MS at The University of Hawaii.

The idea of Kundalini Coffee Company to give back a percentage of its coffee bean sales to animal welfare and global environmental causes beyond the cup. Add to that, we are now aligning the other elements of the company such as cars with our emission zero target. Traditional coffee bean roasting uses a process known as drum roasting. Drumb roasting is largely dependent on use of Gas and industrial after burning. Kundalini Coffee is already known for emission-free coffee roasting, requiring no afterburner and creating 79% carbon reduction. Mr. Roe is about to advance emission-free roasting further, and take coffee bean roasting innovation onto a world platform. Roe, a twice published author on Non Fiction science based book, has had a new-found realization of how to roast coffee beans using no electricity, or gas whatsoever. 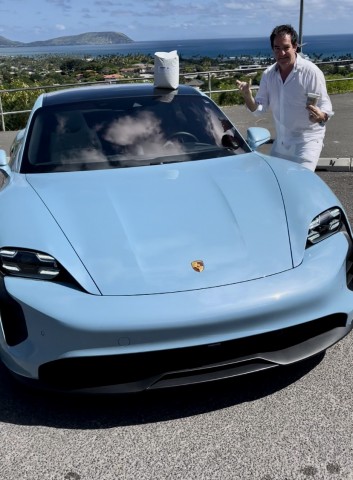 Kundalini Coffee recently sent a group of local Hawaiians to Seattle to gained skilled training from their espresso equipment manufactures. The idea is to create a skilled Hawaiian work force, for Hawaii, said Roe. “The espresso machine technicians seem mechanical minded, and largely self-taught through their passion. Sending Hawaiian to Seattle to train with Manufactures Electrolux Professionals and UNIC was a logical step, This now positions our company to provide skilled technical support to our customers like Four Seasons and others. Such a thing is vital in order to scale coffee locations to lager numbers,” said Roe.

Mr Roe says “I prefer the idea of creating the curb, not following the curb. Our coffee customers all openly speak of their measurable sales growth and results. Most all experience 500% sales growth or more. This when they learn to follow our model and align the company values to resonate with the vibe (vibrational energy) of health organics as well as a global environmental cause beyond the coffee cup. There is a lot more than meets the eyes. Pure intent is a vibration, and recognizing a business itself is a consciousness too is important”, said Roe and went on to add one further example of large coffee sales growth. “Shortly after Four Seasons Resort Ko Olina served the break through specialty organic coffee, the luxury resort broke its daily café coffee sales records. The coffee daily sales records previously were unchallenged at the Four Seasons, since 2016. The day after the new sales record, the new day old sales record was then broken too.”

Kundalini Coffee co-founder invites retailers and hotels seeking to elevate coffee for their customers to reach out to Kundalini Coffee, for healthy Organic coffee solution.

Reviewed By This Is Article About Breakthrough Coffee Roasting Using No Electricity No Gas and Zero Emission was posted on Wednesday, April 6th, 2022 have 4 stars rating.

MICHAEL ROKNICK | HeraldCyclists pedal down the cycling lane along Sharpsville A…