Mondelez, the $81bn maker of Oreo cookies, Cadbury chocolate and Ritz crackers, is on the hunt to acquire healthier snack brands as consumers watch their weight and both investors and governments urge action on obesity.

The US-based food group has made a push into healthy snacks a priority as it plans to redeploy billions of dollars’ worth of investments in coffee companies JDE Peet’s and Keurig Dr Pepper.

However, chief executive Dirk Van de Put hit out at sugar taxes — an increasingly popular measure — in an interview with the Financial Times, saying they were overly “restrictive” to consumers and would limit the potential for his company to invest.

“If you talk about health and wellness?.?.?.?for sure we want to launch brands, but launching new brands is not easy and acquiring brands that already have the prestige and the client base, and are starting to develop, is easier,” he said.

Mondelez, which was spun off from Kraft Foods in 2012, has prospered in the coronavirus pandemic as people stuck at home snacked on its biscuits and cookies, although its sweets and gum brands — usually bought “on the go” — have suffered.

Net revenues at the Illinois-based group rose 3.7 per cent year on year to $13bn on an organic basis in the first half of 2020.

But the company is operating in a climate of growing concern about obesity, which researchers have linked to greater risk of death from Covid-19. The UK, its second-largest market, in July announced anti-obesity measures such as curbs on junk food advertising.

“We sell a range of products but some of them are more indulgent products where the consumer, if eating too many of them, could face obesity,” Mr Van de Put said. “We feel it’s the right thing to do?.?.?. to help the consumer make conscious decisions about what they eat and educate them.”

“It’s something that also even our stakeholders — our investors, our employees — request, that we do the right thing as a company.”

Luca Zaramella, Mondelez’s chief financial officer, said the company was targeting further reductions in its stakes in JDE Peet’s and Keurig Dr Pepper, subject to market conditions, and planned to spend a chunk of the proceeds on acquisitions.

“Importantly we have $10bn-worth of coffee stakes sitting on our balance sheet?.?.?.?The idea we have is to convert those coffee stakes into more snacking platforms and acquisitions,” he said. JDE Peet’s floated in Amsterdam this year.

Mondelez would fill gaps in countries where it lacked a presence in chocolate or biscuits, said Mr Zaramella, but also expand its portfolio of healthy products. “It’s about product lines that are more in tune with wellbeing, but it’s certainly not limited to wellbeing,” he added. Acquisitions were likely to be “bolt-ons”, the company said. 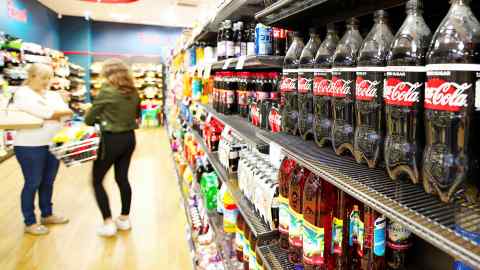 The group, which also makes Milka and Toblerone, says it has worked to reduce sugar, salt and saturated fat in its products, including cutting calories from confectionery aimed at children and developing products such as Cadbury’s Go Nuttier, which is largely made up of nuts, with just a thin layer of chocolate.

“We are very open to work with governments on any objectives that they have,” said Mr Van de Put. But he added: “I’m a bit hesitant that sometimes the authorities want to go too far, want to be too restrictive, too prescriptive to the consumer. [We want] a joint campaign trying to educate rather than restrict.”

One example of overly strict measures was sugar taxes, he argued. Soft drinks have been the main target of levies introduced in countries including France and Mexico as well as several US states during the past decade. The UK’s 2018 tax pushed companies to reformulate drinks with less sugar, leading campaign groups to push for its extension to more products.

Mr Van de Put also warned that a no-deal Brexit at the end of the year without a trade deal would be “very disruptive” for the company’s supply chains between the UK and mainland Europe.

“It could be that we would have to limit the range of products to sell because it’s not worth it any more to ship these products from A to B?.?.?. [and] if we would not have the opportunity to keep the British pound to an equal level with the euro, we would potentially have a product that now becomes more expensive,” he said.

Reviewed By This Is Article About Cadbury maker Mondelez seeks acquisitions of ‘healthy’ brands was posted on Monday, September 21st, 2020 have 5 stars rating.

Coffee: Know the health benefits of this beverage

A cup of coffee can give you much more than just an instant energy boost. This i…

Trend promises a smooth face and pain-free joints. But do you need… Collagen in your coffee?

Would you like some collagen in your cappuccino?’ asks the server in AT Feast, a…