Coffee and community improvement districts: Unpacking the mystery of the $7 Starbucks macchiato

It doesn’t matter if you’re buying a home, car, food or coffee — the price of everything has soared since the onset of the pandemic. Inflation hit a 13 year high of 5.4% in July, and supply chain disruptions led Vice President Kamala Harris to encourage parents to start buying Christmas presents as soon as possible.

Both inflation and shipping delays are valid explanations for the rising cost of everything. Still, it didn’t explain why I paid nearly $7 for a grande Iced Caramel Macchiato at a Starbucks in Washington, D.C.’s Dupont Circle on the first Sunday in August. I had heard about the ongoing global coffee shortage — caused by rolling COVID lockdowns and climate change — but I also recall reading that Starbucks CEO, Kevin Johnson, assured customers and investors that Starbucks had stockpiled enough coffee to mitigate any future supply shortages.

But, after paying a price comparable to the minimum hourly wage in some states, I began to question the integrity of Johnson’s assurance.

I knew the city was becoming more expensive by the day — but $6.55 was absurd, even in Washington, D.C.. Needing an explanation, I spent the rest of that afternoon using the mobile order feature on the Starbucks app to look up prices of Grande Iced Caramel Macchiato across the country.

The prices, like everything else these days, made no sense. How could an Iced Caramel Macchiato be cheaper in San Diego than in Detroit? Or cheaper in Los Angeles than St. Louis? I fired up Microsoft Excel and embarked on a month-long truth-seeking journey to solve the mystery of the $7 macchiato.

I decided to record data from stand-alone Starbucks — meaning those not found in hotels or malls — in the downtown areas of the nation’s 30 largest metro areas. Yet, the hours spent compiling all of this data only left me with more questions. Why was coffee more expensive in Texas than California, and how could prices in St. Louis be comparable to downtown Manhattan? 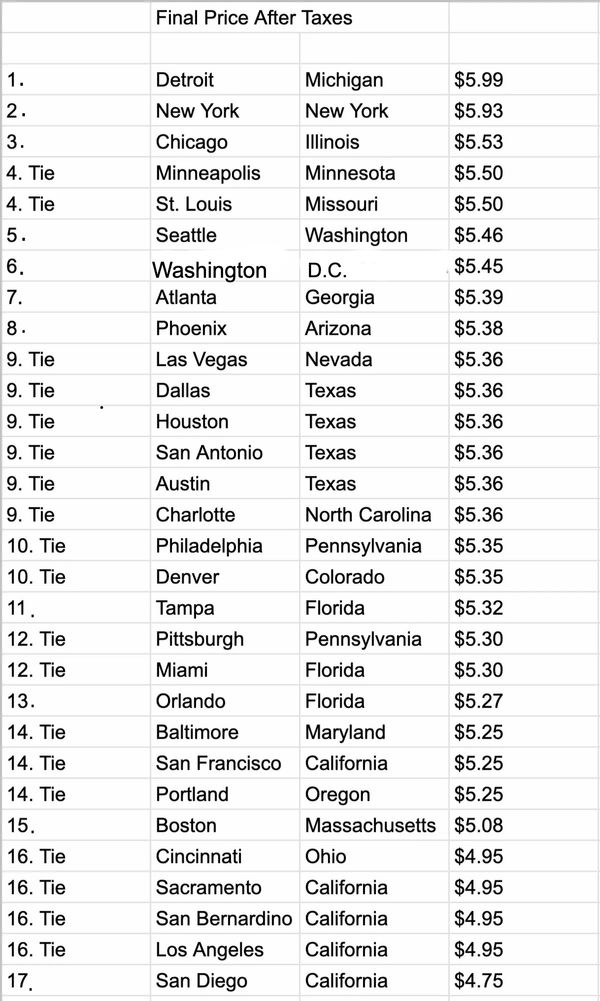 I didn’t notice that there were two different prices listed on the receipt until the following Sunday. The first being the actual cost of the drink, and the other being taxes. And so, I made another spreadsheet.

It turned out that Johnson wasn’t lying, as Grande Iced Caramel Macchiatos were $4.95 in all but six of the metro areas. I soon realized that the extreme price variations were neither a product of inflation, supply shortages or America’s largest coffee chain. Instead, my $7 coffee might have been the fault of our state legislators (and by extension, the people that elected them). 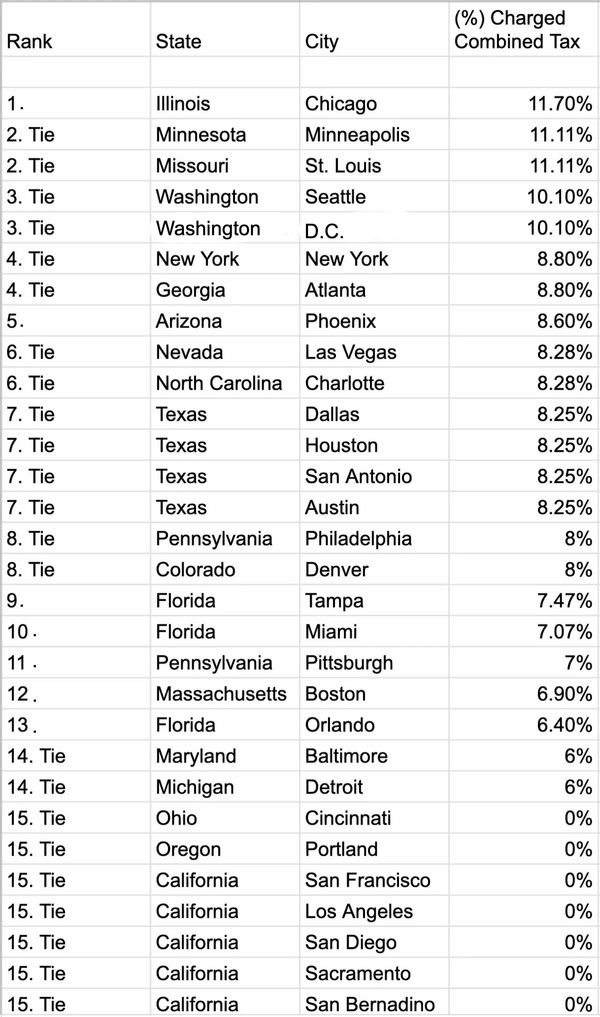 I decided to convert the sales tax charged on the Starbucks app into a percentage, and check my math using Avalara, a tax compliance website with data for every U.S city.

Admittedly, I was never great at math, but I found it hard to believe that I miscalculated the sales tax charged by Starbucks in half of the cities. And while businesses overcharging for sales tax isn’t that rare — Doordash, for instance, was sued in 2019 as part of a class-action lawsuit for allegedly overcharging sales tax —there was no way I had managed to discover the largest sales tax fraud in American history. So, the following Sunday, I made another spreadsheet.

Some Starbucks locations were easier to clear of possible tax fraud than others. Although websites like that of the Massachusetts Department of Revenue and others claimed Boston’s sales tax was 6.25%, I was able to find the missing 0.75% charged by Starbucks buried on the Commonwealth’s Data Analytics and Resources Bureau’s website.

The search for the additional 3% of sales tax levied by a Starbucks in Minneapolis was just as time-consuming. The tax was so secret that the sales tax calculator, found on Minnesota’s Department of Revenue’s website, couldn’t even explain where the additional tax came from. It took an entire day to find a PDF  — hidden in the deepest depths of the internet — explaining that restaurants in downtown Minneapolis are subject to an additional 3% tax in addition to the ones already levied by the city, county, and state.

The only Starbucks locations potentially “overcharging” customers for sales tax were all in St. Louis, which is home to 138 “special taxing districts,” like “Community Improvement Districts.”

The CID’s are usually in low-income areas, and the rates are dictated by property developers who use the tax revenue to subsidize their new developments. The oversight of CDI’s is so lax that 60% of them failed to report their earnings, and 90% never submitted budgets to the city, according to a 2018 report.

Since then, Missouri has published a map of all the state’s special taxing districts, but failed to include their sales tax rates. Instead, there is a separate website with a sales tax calculator that doesn’t work. The calculator, unable to determine the sales tax rate at several Starbucks locations, suggested calling Missouri’s Department of Revenue. Unfortunately, nobody picked up my calls.

One can only assume that the 12.12% sales tax charged by Starbucks on South Kingshighway isn’t fraudulent.

Local politics affect the price of your go-to coffee order

The CIDs don’t just appear out of thin air, though, but are approved by elected local officials, but it doesn’t seem like many people care enough to organize any significant opposition to subsidizing gentrification. And, if neither the governments of Missouri or Minnesota can provide an accurate sales tax rate using a calculator they provide on their websites, then it’s safe to assume that the residents aren’t aware of these taxes either.

The mystery of the price of my Grande Iced Caramel Macchiato isn’t a mystery at all. The economies of our cities have been ravaged by the pandemic — decimating their streams’ revenue. And cities like Washington, D.C are already attempting to make up lost revenue by passing an absurd 10% beverage and food tax, which explains the price of my coffee in Dupont, and officials are even entertaining a 1.5 cent tax on every ounce of artificially sweetened beverages.

Price gouging isn’t just caused by inflation or supply shortages; rather, it’s a combination of economic blight brought on by the pandemic and our disdain for the dullness of local politics. But maybe it’s time we start paying attention to the local officials we elected and how they’re taxing us before my Starbucks order reaches $10.

About "Coffee and community improvement districts: Unpacking the mystery of the $7 Starbucks macchiato"

Reviewed By This Is Article About Coffee and community improvement districts: Unpacking the mystery of the $7 Starbucks macchiato was posted on Thursday, September 23rd, 2021 have 5 stars rating.

Own a piece of Parisian history: the Ritz hotel auctions off 1,500 items

The term “ritzy” came into being circa 1910, inspired by the opulence and glamou…

Established in 1995, Caffè Vita is well known in Seattle as a homegrown coffee c…

The Freyer-Newman Center at the Denver Botanic Gardens in Denver on Sept. 23, 20…