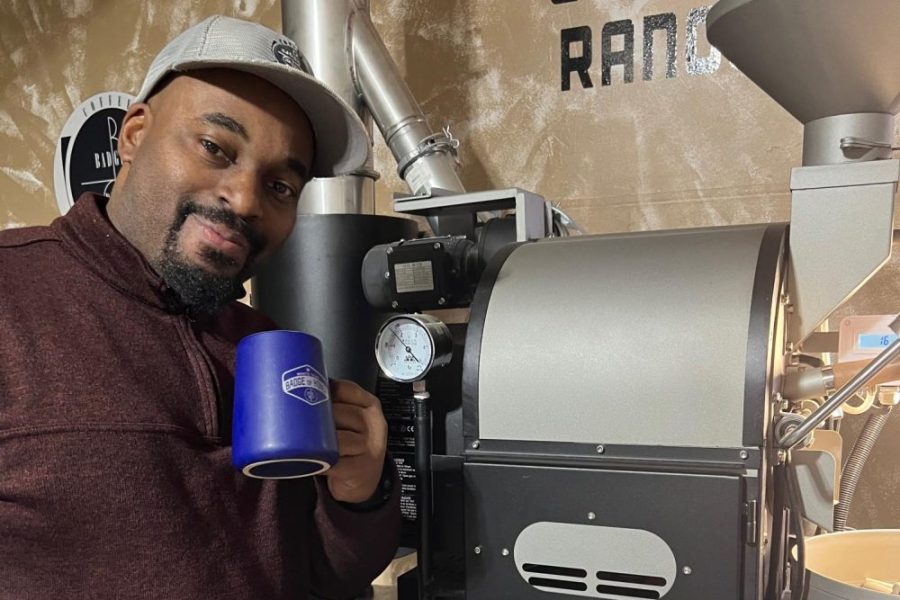 Mike Jones stands next to a coffee roaster in his garage with a cup of Badge Brew. An Evanston Police Department officer, Jones balances his police work with his coffee company.

Working around the clock as a detective requires caffeination. For Evanston Police Department officer Mike Jones, that often meant convenience store coffee loaded up with milk and flavoring to make it palatable, but he found that unauthentic.

“By being in the minority community, adding all that cream and sugar stuff contributes to diabetes (and) hypertension,” Jones said. “It’s just not the natural way the coffee was intended to be consumed.”

Jones, who is Black, said he started spending his weekends off trying out different Chicago coffee shops in 2010. After learning from owners about the high costs associated with operating a brick-and-mortar shop, he said he looked into coffee e-commerce.

Last July, after 10 years of thinking about getting into the coffee business, Jones formed Badge Brew Coffee Roasters. Jones said he originally intended to leave policing out of the company. He saw the company as marking the next phase of his life as he neared retirement after decades in law enforcement.

But he later changed his mind.

“It didn’t make sense to take a part of who I am and what I committed for the last 20 years and not continue that in my life,” Jones said.

Proceeds from sales go toward the 100 Club of Illinois, which offers long-term support for families of officers killed or injured in the line of duty, and Blue H.E.L.P., which focuses on mental health awareness for police officers.

Jones said that although law enforcement plays a major role in the company’s mission, he didn’t want to limit the company’s brand to policing. The company’s motto, “What’s Your Badge of Honor…,” refers to what makes everyone proud, according to Jones.

“Policing is something that I do,” Jones said. “It’s not who I am.”

Jones samples his blends by hand-roasting beans with a small roaster in his garage. He produces and packages his roasts at the Coffee Lab at North Central College, where he also volunteers, in Naperville.

To focus more on Badge Brew, Jones transitioned to working as a community police officer last August after spending 10 years as a homicide detective. He said the time he spends working at EPD and operating Badge Brew total around 80 hours per week.

“He just really has a passion for it, to the point that this is something he committed himself to while he still works full time,” his wife Brandy Jones said.

Tosha Wilson serves as a sergeant at EPD and has worked alongside Mike Jones for the past 15 years. An aspiring entrepreneur herself, Wilson said it is important for business owners to support each other.

“There’s not a lot of Black people, let alone Black men, pushing to brew their own coffee or roast their own beans,” Wilson said. “I thought it was cool.”

Badge Brew is currently sold online and in local grocery stores. It can also be purchased on a subscription basis, which Jones said allows local police departments to keep the coffee in stock. Evanston, Skokie and Wilmette Police Departments drink Badge Brew, as does a U.S. military base on the Horn of Africa, Jones said.

Jones said his original plan was to have Badge Brew fully operational by the time he retires in about three years from now, a goal he said the company has almost reached.

“It’s always been a vision of mine, I’m the type of person (where) if I put the effort into it, I can accomplish it,” Jones said. “The only thing that surprises me is it moves so fast.”

Not long ago, A Nightmare on Elm Street star Robert Englund announced that he wo…