The store, which is the first to feature a drive-through, is along N.C. Highway 24-27 inside Sun Plaza Shopping Center next to Academy Eye Center.

Owner Paul Hinchliffe’s daughter Merideth is in charge of the Albemarle store. She previously managed the location in Oakboro. 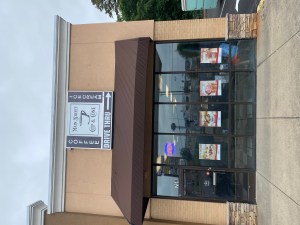 The new Cup and Cone store is located inside Sun Plaza along N.C. Highway 24-27.

The business, which offers around 40 flavors of ice cream, coffee and an assortment of sweet treats, opened its second location last summer in Locust Town Center. The first location in Oakboro opened in November 2019. Each location is run by one of Hinchliffe’s daughters.

For the first few days, Merideth said more people seem to have utilized the drive-through. To make sure everyone is as safe as possible, employees wear masks and gloves, the tables are spread out and proper sanitation protocols are followed, she said. 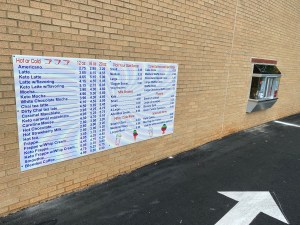 Aside from the drive-through, one other feature that differentiates the Albemarle location from the rest is a giant photo-op mural on one of the walls, which features large blue and white wings with the words “Be Kind.”

“Kindness is the easiest thing in the world to spread and it helps anybody because you never know what anyone’s going through,” said Merideth, who painted the mural. “I’ve seen people take pictures in front of it and post their selfies.” 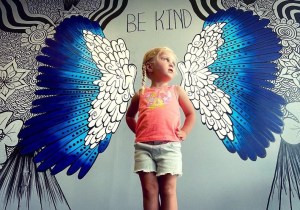 Mary Randall in front of the “Be Kind” mural. Photo courtesy of Merideth Hinchliffe.

She noted that many of the regular customers at the other two locations have already began coming to Albemarle, which she appreciates.

“Certain people like certain baristas,” Merideth said. “I worked mornings in Oakboro so I had my normal crowd and they’re starting to migrate over here because they like my coffee the way I make it.”

She said she can’t quite believe her family’s business in only a few years has become a Stanly County franchise.

The plan down the line is to possibly open a new location somewhere in Union County, Merideth said.

A grand opening for the Albemarle store will take place Friday from 5 p.m. to 10 p.m. There will be live music, a magician, face painting and balloon animals. There will also be a raffle where someone has the chance to win free coffee for a year.

Chris Miller has been with the SNAP since January 2019. He is a graduate of NC State and received his Master’s in Journalism from the University of Maryland. He previously wrote for the Capital News Service in Annapolis, where many of his stories on immigration and culture were published in national papers via the AP wire.

Reviewed By This Is Article About Main Street Cup and Cone opens third location in Albemarle – The Stanly News & Press was posted on Tuesday, May 25th, 2021 have 4 stars rating.

Award-winning burgers on the menu in Kippax

The Beef and Reef burger! Photos: Michelle Taylor. “We’re not a franchise, it’s …

The Grind, a local coffee shop in Morgantown, has reopened its dining room after…