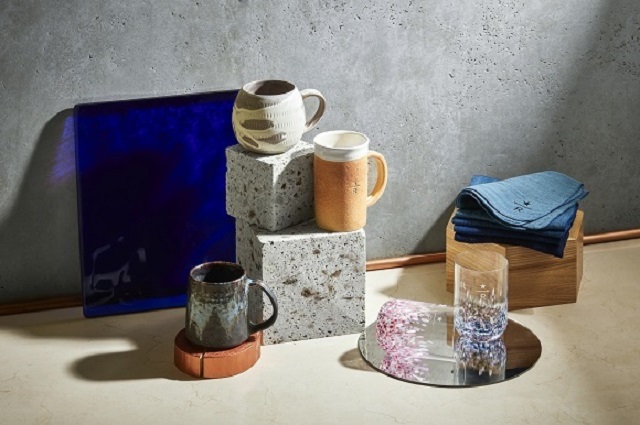 Jimoto Made soothes the heart even after you’ve drunk the last drop of coffee.

At the end of last month, Starbucks Japan announced its new Jimoto Frappuccino lineup, giving each prefecture in the country its own special flavor. This isn’t the first time Starbucks has invoked the word jimoto though, which means “local,” as it also has a line of Jimoto Made drinkware, designed by skilled artists from around Japan.

Four new drinkware pieces have been added to the collection, drawing inspiration from the Starbucks Reserve Roastery Tokyo facility and the surrounding scenery.

First up, the paired Hiru Sakura and Yozakura, from Aomori Prefecture glassworks Tsugaru Vidro. Their names translate to “afternoon cherry blossoms” and “nighttime cherry blossoms,” with the hand-blown vessels evoking the sakura that blossom along the Meguro River, which flows right outside the Roastery.

Japan’s favorite flower is also the basis for this more subtle motif in the Tobiganna (“Fluttering Plane”) from Oumei Kamamoto, one of the kilns in Fukuoka Prefecture’s Chikuzen district. The grayscale representation of a sakura petal fluttering in the wind after being blown from the branch makes for a gentle and mature atmosphere.

Genzuigama, the designers of Kakehashi (“Suspension Bridge”), want you to pay special attention to the handle, which alludes to the arcing pipes that carry coffee beans from one floor of the Roastery to the next. The rustic glaze is characteristic of Japan’s mingei (“folk craft”) art movement, which Genzuigama’s home prefecture of Tottori was a strong center.

And last, Shiga Prefecture’s Uzangama is offering Cask, a straight-sided mug with the straightforward inspiration of the Roastery’s coffee bean storage casks.

The mugs are all priced at 6,050 yen (US$55), while the glasses are 4,950 yen each. They’ll all be available starting July 9 at the Starbucks Reserve Roastery Tokyo and through Starbucks Japan’s online store.

Reviewed By This Is Article About Starbucks Japan releases beautiful new drinkware line designed by local artists?Photos? was posted on Thursday, July 8th, 2021 have 4 stars rating.